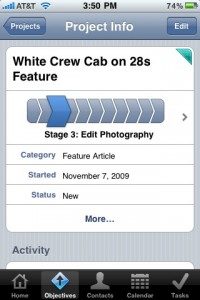 I pondered for a bit a month or so ago about the high cost of software, and about whether or not I should break down and purchase some of the pricier items. Well, it’s been a bit now, and I broke down and bought Daylite for the Mac and Daylite Touch for the iPhone. After playing around with it for a little bit, I figured I’d drop in and put in my two cents.

Daylite is a great program for getting things done, but that wasn’t really what motivated me to pick it up. I wanted a way to manage the multitude of different things I have going on at any one time. For example, right now I have 6 articles to write, 6 different ones to photograph, 3 to edit and 5 pending publication – Which is besides all of the daily things I do and my work here for Apple Gazette. But had you asked me two months ago what I had to do for work, I would’ve rambled off a list of things to do, but missed a few of them along the way. In fact, by using Daylite, I’ve found things that I needed to do and added them to my list.

Daylite Touch integrates with Daylite, and gives you a mobile way to keep track of your projects and assign tasks. I had heard mixed reviews about the functionality of the app, mainly because of the difficulty in syncing data, but I haven’t had any of those problems. Admittedly, it wasn’t easy to set up for the first time, but now that it is, I’m not having any issues. It’s nice for setting quick appointments and updating status on the go.

There are a few cons with the system. There are no push notifications for Daylite Touch, you don’t get a reminder message or note when an appointment comes up, like you would with the traditional calendar app. The easy fix is to sync the phone with the Daylite Mac app frequently, which can sync with iCal as well. Then you get notifications from the native iPhone calendar app. It’s a bit of a workaround, but it does work. The other issue is that it’s a $50/yr cost. I don’t know how the renewal process works, but the fact that I have to buy this app every year is a bit upsetting. I’d rather pay once and move forward, particularly when the cost is so high.

Overall, I think it’s a great setup. Time will tell how things go with Daylite and whether or not I use it for another year, but for now, it’s the perfect combination for what I need.