There are dozens, if not hundreds, of iPod dock equipped radios and alarm clocks. I look at a lot of them here, but not everything gets reviewed, primarily because a good portion of them aren’t worth writing about. The primary thing that these companies seem to forget when they construct these iPod playing monstrosities, is design. I love the slick, easy design of my iPod, and I want that same kind of design in my stereo/radio – whatever – if I plug my iPod into, I want it to be slick, easy to use, and to sound great.

Luckily, the guys at Xtrememac have incorporated all of those essential features into a very well designed packaged they call “Luna”. 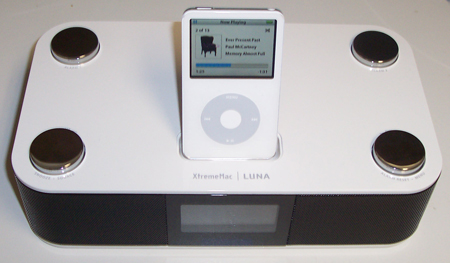 At first glance, to me anyway, Luna here looks like what Apple would design if they were designing an Alarm clock. It’s sleek, well made, and it has cool shiny buttons (and who doesn’t love cool shiny buttons). My only real complaint in this department is the fact that the buttons feel a little hollow when you click on them. It gives the device a “cheap” feeling that it doesn’t deserve.

One thing you should keep in mind about the Luna is that, even though I keep saying Alarm clock (and it is a fantastic Alarm Clock) this thing will also blow the windows out of your home if you want it too. The sound is big, bold, and very crisp. I have to stress that I am not an audiophile, and a more trained ear might find something to complain about here, but not me. I’m very impressed with the sound of this machine. 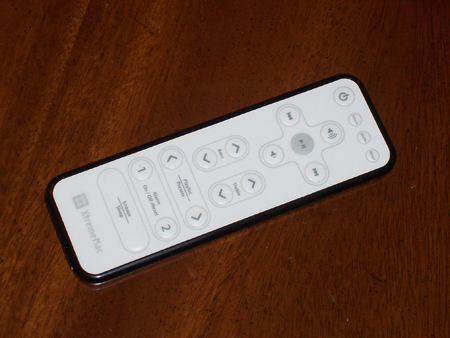 The remote, unlike those buttons on the device, feels heavier than I expected. It feels well made, and sturdy. (I happen to know it’s pretty sturdy since I dropped it on concrete…twice…and it still works just fine) The remote features a variety of navigation options, even allowing you to adjust the treble and bass, as well as both of the alarms you can set, and a sleep/snooze button.

The Luna doesn’t feature iPod menu navigation from the remote, which isn’t really a big deal since you can’t see the menu from more than a few feet away anyway. It does, however, allow you to switch between playlists via the remote, like you were switching CDs in a mult-disk changer. It’s a nice way to navigate your collection of music, but if you don’t make a lot of playlists, it can be hard to find the music you’re looking for from the the other side of the room.

The remote is, again, well put together, but I did find that in some instances it was a little sluggish. I found myself pointing at the device and pressing the “next” button a few times to get it to switch over to the next track/playlist. I had to do this more than once. 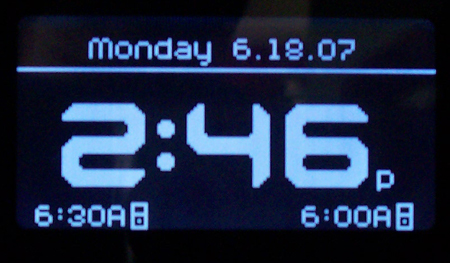 The front of the Luna features a backlit screen that makes it very easy to set your alarm preferences. It’s pretty to look at, and easy to use. It even features a nice dimmer in case you don’t want the time glowing on the other side of the room when you’re going to sleep. 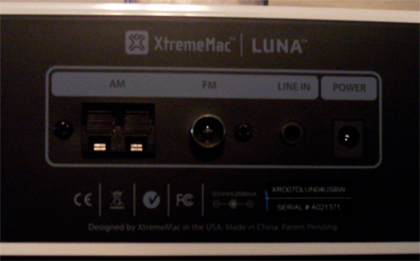 The Luna is actually more than just an iPod player. You can listen to AM/FM Radio or even hook in another audio source like a CD player into the device. If you’re like me, though, you’ve already got all your audio on your iPod…but should you need to add another external source, the Luna is ready to go. 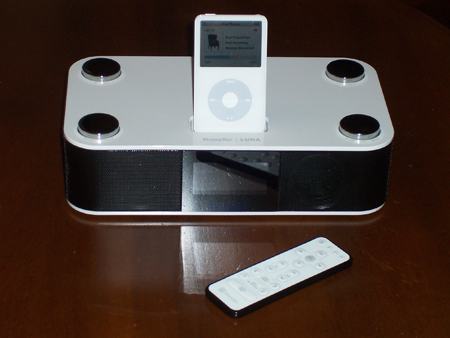 The alarm functions on the device are easy to set up through the on screen navigation, and the Luna is loud enough that it doesn’t even have to be in the same room with you to wake you up. For example, I left it at a friend’s house for testing one evening, forgetting that the alarms were set. The Luna was sitting in the living room, but come 6 am, the whole house was awake….needless to say, when I called the next day there was no “hello” or “how are you today?”, instead I got a very loud “Why didn’t you tell me you set the alarms?!”

The Luna is one of the best iPod audio systems I’ve ever used, and is, hands down, the best iPod Alarm clock I’ve ever tried out. If you’re looking for something in the $100 to $200 price range, the Luna would be my first choice.

You can see more pics of it, and find out more details about the system at the XtremeMac official site by clicking here.