Will Apple Ever Return to a Single MacBook Line?

by Brian Meyer 9 years ago3 months ago
1 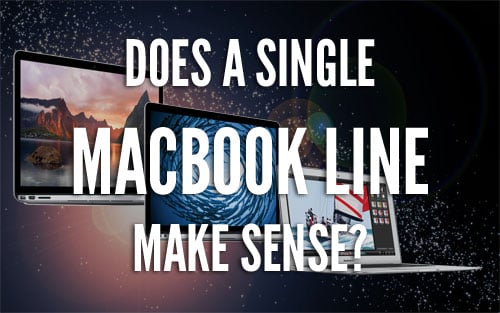 I’ve had a few MacBooks in my stint as a self-proclaimed Apple fanboy, so I feel that I have at least a small amount of insight into the path Apple has taken over the last 6 years or so in regard to lineup and model placement. I started with a 13” white clamshell MacBook and currently work on a 15” Core i7 MacBook Pro and had a good couple others in-between. Prior to my history with Apple notebooks there was a single MacBook line, even if it wasn’t called a MacBook.

As the years have passed Apple has moved from the polycarbonate MacBooks and aluminum MacBook Pros to an all-aluminum lineup, and a few years ago they even introduced the MacBook Air. Currently your choices for a notebook from Apple are the MacBook Pro, available in 13 or 15-inch displays and the MacBook Air which is available in 11 or 13-inch models. Apple condensed its lineup to this more tight-knit family of notebooks to help show the benefit of each model and to better align customers to the model they need, which is a good thing. Within these two models however there is an assortment of sub-models. The question is, with technology catching up to itself, are these models really necessary and could Apple move to a single MacBook Line?

Sure, there are some things you can do on a MacBook Pro that you can’t do on a MacBook Air, but for the average consumer these are few and far between. The MacBook Air has inadvertently become the entry-level model of Apple notebook computers with the 11” model being just within reach of students and newer workers. This isn’t to say the 11” MacBook Air is cheap, but it’s the least expensive of the bunch.

The 13” Air comes with a 1.3GHz dual-core Intel Core i5 processor, 4GB of memory and a 256GB flash hard drive for about $1,300. You can up all of these stats for more money, but for the regular everyday Apple user, these are pretty good. Even if you up these to the Core i7, 512GB hard drive and 8GB of RAM you’re still under $2,000. Now, the graphics card is definitely less powerful and will only run a single Thunderbolt display, but not too many people looking at the Air will ever think of using two Thunderbolt displays. The HD Graphics 5000 card from Intel will be more than enough for even intensive video editing.

The big kid on the block of course is the MacBook Pro. This beast of a notebook is available in 13 or 15-inch varieties and can have a 2.8GHz Core i7 processor, 16GB of RAM and 1TB of flash storage. This is obviously a lot beefier than the Air could be, but at just under $2,700, it’s a lot more expensive, too.

I believe that within two years Apple will merge the Air and Pro lines to make a single line of notebooks. The technology behind both product lines is starting to blur and it only makes sense to make things easier and less cluttered; something Apple is known for.

I propose that Apple will have three total notebook computers by 2015, possibly sooner. All will feature the wedge shape of the MacBook Air and the processing power of the MacBook Pro. The other features will be add-ons you can get when purchasing the computer from Apple at time of order.

The models I believe Apple will do this with are the 11-inch, 15-inch, and 17-inch. Currently Apple doesn’t offer a 17-inch MacBook Pro, possibly due to lack of demand and possibly due to cost of making Retina displays for a screen this large. Either way, with screen technology advancing I believe the 17-inch Pro will make a comeback. The 13-inch model will go the way of the buffalo, as it just isn’t a useful screen size when the 15-inch will be just as thin. The diminutive 11-inch is a great way to get future fanboys and fangirls into the Mac world, and it’s just easy to carry around.

The waters have become muddied as of late with multiple models of each major piece of the product lineup for Apple and something needs to be done to simplify things. This merging of notebooks is exactly what Apple needs to make the computer buying process a little easier and smoother. 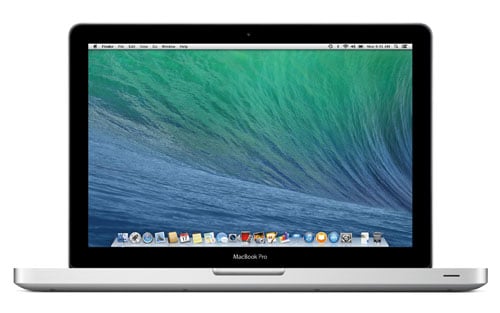 Sure, the 15 and 17-inch MacBook Pros will have to lose some ports, but the smaller wedge-shape will give it a better look, feel, and as they’ve proven in the past Apple isn’t afraid to cut out components for aesthetics.

The lineup as a whole would win, however, as better processors would abound and parts would be more standardized. Instead of multiple models Apple might even offer a color or two, just like the iPhone 5S (no, I doubt we’ll see rainbow polycarbonate MacBooks any time soon)

Apple would be wise to tighten up their product lines and focus more on profitability and less on having so many models. While Apple still uses far fewer models than its competitors, history has shown that Apple does best with fewer choices and a pre-planned model lineup that is easy for a non tech-savvy customer to navigate.

By cleaning up their notebook product lineup, Apple will be back to the roots that made them as strong as they are today. In reality, I doubt this would really happen. The 17-inch MacBook Pro may never be revived, but as someone that loved the 17” machine I can hope.