Apple sure knows how to make a sexy computer. On the WWDC stage today in San Francisco, Apple unveiled the long-rumored next-generation MacBook Pro, and it’s a stunner.

Out with the old.

Apple has rebuilt the MacBook Pro from the unibody-up, re-engineering the whole thing by ditching yesterday’s technologies and replacing them with tomorrow’s. Here are ten wow-worthy features of the brand new, next-generation “MacBook Pro with Retina Display.” (Yes, that is its full name. And no, Steve “simplify, simplify” Jobs would never have greenlit such a mouthful.) 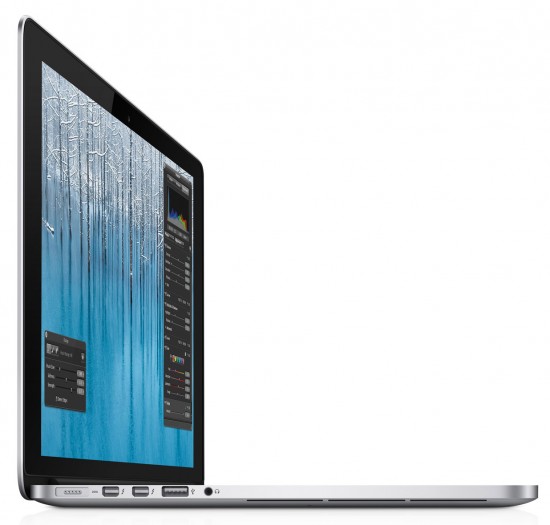 With a resolution four times the size of current-generation MacBooks, the new MacBook Pro’s Retina Display packs in 220 pixels per inch. That’s less than the iPad 3’s 264ppi, and significantly less than the iPhone 4’s 326ppi, but still dramatically more than any other laptop offers. Boasting a total of more than 5 million pixels, the 15″ display (the only size it comes in) constitutes 3 million more pixels than an HDTV. Viewing angle is an incredible 178 degrees, while the new display also offers 75% less glare and 29% higher contrast that older models. 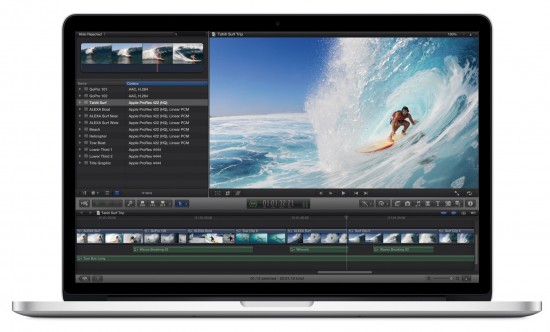 Quad-core Intel Core i7 (or i5) processors that starts at 2.7GHz but can scream up to 3.7. NVIDIA GeForce GT 650M “Kepler” graphics processor. 16GB of 1600MHz RAM. Flash storage (more on that in a sec) that provides sequential read speeds up to 500MBps. What do all these numbers and acronyms mean? The new MacBook Pro is the fastest, smoothest, most responsive computer ever made. It’s not just fast. It’s so fast, it creates a far more fluid, sublime experience than computer users are used to. Big apps don’t take forever to load, and the computer boots up in mere seconds. The future is lightning fast, baby, and it’s here today.

The new MacBook Pro abandons your traditional, magnet-based hard drive altogether in favor of Flash storage. Flash storage is much faster than any hard drive, requiring no moving parts. It’s what your iPhone and iPad have been using for years, and Apple put it in the MacBook Air as well. This is the first time they’ve implemented it in their flagship notebook, but to work as a storage solution for a top-of-the-line computer, it would require an unprecedented capacity. Starting at 256 GB, it also comes in a 512 GB version, and can be specially configured up to 768 GB of Flash storage. All this translates to quiet, smooth, and did I mention the ultra-fast part? 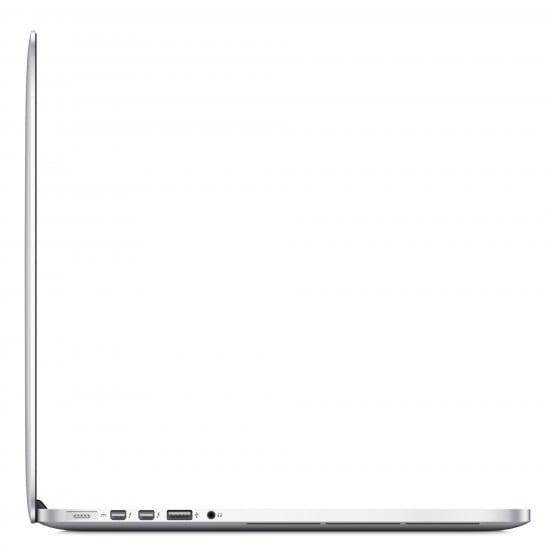 Taking its cues from the MacBook Air, but with the more advanced guts of a futuristic MacBook Pro, the new notebook weighs in at less than four-and-a-half pounds, and measures .71″ thick. Apple is boasting that their shiny new toy is “precision engineered down to the nanometer,” and looking at pictures of its guts… they ain’t lying. With the kind of relentless focus and attention to detail that only Apple is capable of, they custom-designed and manufactured every part of the new MacBook Pro, making new advances in both internal and external design, and basically cramming as much technology as is physically possible into the least amount of space. They packed advanced new speakers, dual noise-reducing microphones, two high-efficiency fans, and all the circuits and boards and processors that make the whole thing work. It’s not hyperbole to call this thing a marvel of engineering. 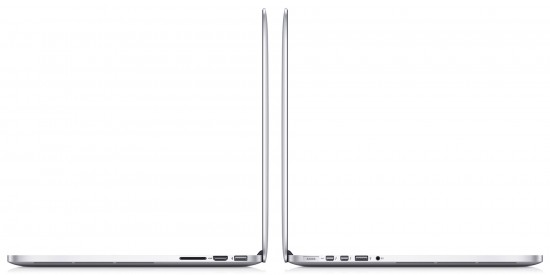 This one’s not all that surprising, really. Apple’s been pushing toward diskless software for the last few years now, most prominently evidenced in the digital-download-only release of OS X Lion last year. While the standard lineup of MacBook Pros still includes a DVD drive, it’s a no-brainer that this “notebook of the future” would dispense with the optical drive altogether. This day has been a long time coming, and today it’s finally happened. Buh-bye disks! (Also: so long, Ethernet port.)

There was a time when pundits thought Apple would never put USB 3.0 into their devices, so that Apple could instead propogate its Intel-licensed Thunderbolt format. What a difference a year makes. Sixteen months later, and still just a handful of devices are Thunderbolt-compatible. Apple wisely decided it was time to follow the direction the wind was blowing, and integrate USB 3 into its new laptop. But it’s worth noting that they haven’t given up on Thunderbolt at all; there are two Thunderbolt ports in the new MacBook Pro, just as there are two USB 3.0 ports. There’s also a long-wished-for HDMI port, and an SDXC card slot. 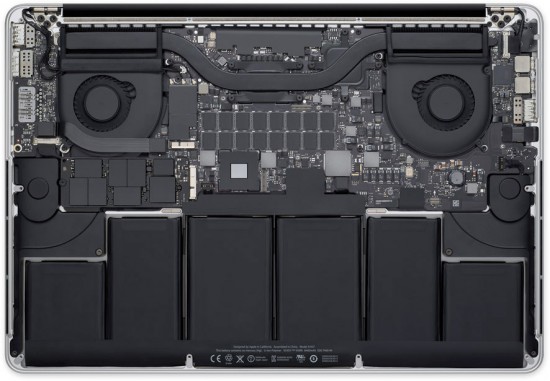 Seven hours of battery life may not seem like a lot, but it’s right in line with typical battery life for a MacBook Pro. And frankly, it’s pretty amazing that they were able to squeeze even that much juice out of a power-hungry system built on the latest chipsets, processors, and of course, that ultra high-res display. Apple says that they engineered entirely new kinds of batteries — 95-watt-hour lithium polymer monsters — for the new MacBook Pro, using “advanced chemistry” and “Adaptive Charging technology” with a lifespan that allows for up to 1,000 recharges. With it, they claim that the notebook will withstand up to 30 days in sleep mode, and still come right back to life when you open it up.

I was tempted to add an eighth bullet point here with the pricetag, because it’s pretty doggone astonishing, too. But it’s eye-popping in the other direction. Turns out, all this hyper-advanced, next-gen, souped-up technology doesn’t come cheap. The new MacBook Pro with Retina Display starts at $2,199. Starts. Tricking it out with the biggest and fastest gear will run you upwards of $3k.

Now you know why Apple’s savvy marketing machine is positioning this thing as “the MacBook Pro of the future.” They know that the average consumer won’t be able to (or willing to) afford a laptop at that price point. But those who can, and are more than willing — which is a not-small portion of the marketplace — can have tomorrow’s technology today.