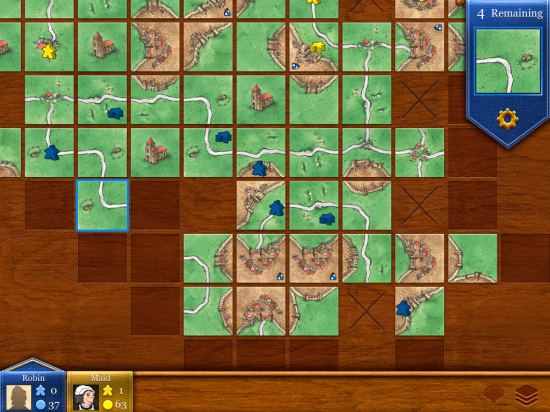 The Coding Monkeys’ implementation of the German-style board gameÂ Carcassonne for iPad (and iPhone) is absolutely beautiful. The game was designed with a deeply respectful attention to detail, with every last feature that fans could hope for — and then some.

In Carcassonne, in case you don’t know, the object of the game is to claim territories, roads, and castles, with the winner determined by who claims the most. What makes the game unique is that instead of playing on a pre-defined game board, you create the board — and therefore the territories to be claimed — as you go. The game pieces are the tiles that make up the board. Each player places one tile per turn, and then has the option of staking a claim to whatever field, road, or castle is begun with that tile. The game makes this easy by highlighting the spots available where your current tile will fit, and then showing you your options for claim-staking. 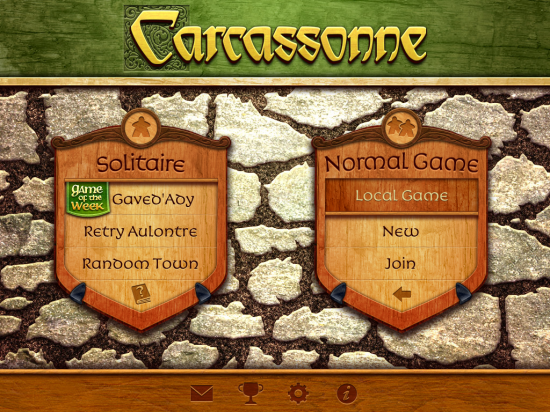 You only get points for completed territories, so naturally, strategy comes into play, since other players aren’t going to willingly help you win points. Since there are only a certain number of each kind of tile, it’s possible to use your tiles to block another player, for example, but that usually means sacrificing a tile that you could be putting toward your own points. If this is all too much to get your head around, fear not: there’s a fantastic tutorial built in to the game, featuring a charming voice actor who explains the ins and outs as you go. 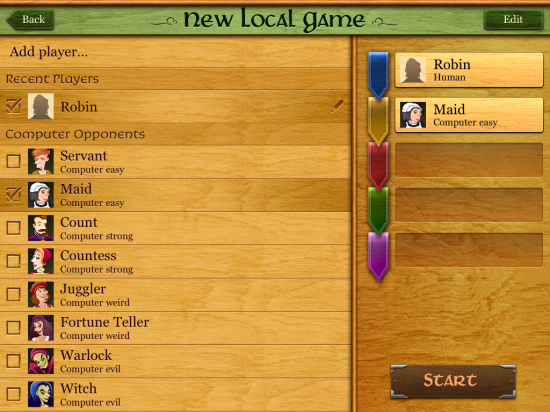 The iOS version of Carcassonne automates everything about the game, and gives you tons of options for customization. Pick A.I. opponents that match your own skill level, or choose an opponent who’s better than you for a real challenge. You can also play multiplayer games via Game Center (with built-in chat), or local multiplayer, where you pass your iPad around. Both game types allow for up to five players. The online game is playable as turn-based, with push notifications to let you know when it’s your turn. There’s also a solitaire mode where no other players are involved at all, and the object of the game is to keep laying tiles until you run out. 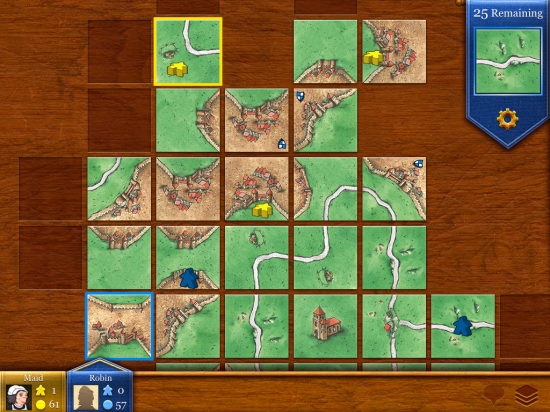 Everything about the presentation is a class act, from the lush wood textures to the relaxing, classical/old world folk music that plays softly in the background. The game board is pinch-to-zoom enabled, making it very easy to get a look at the entire layout (which can be rather sprawling by the end), or move in close for nice, detailed look at things.

This is a fairly new release, but expansion packs are already in the works which will match the real-life expansions that board game players will be familiar with. I played a dozen or so games in preparation for this review, and experienced no crashes or glitches of any kind.

Carcassonne is just phenomenally well made, and it’s the best reason yet for board gamers to ditch the cardboard and buy an iPad. Highest recommendation.