Indie filmmaker uses AppleTV to show his film in theaters 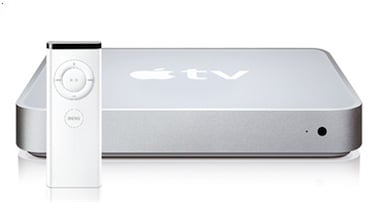 Just yesterday I asked if Apple had forgotten the AppleTV, and low and behold, I read this article about an indy filmmaker who saved thousands of dollars by using an AppleTV to show his film in local theaters.

While I can’t imagine a movie I’d like to see less in the world than something labeled and indy “political thriller” (I like my politics and my entertainment separate, thankyouverymuch), I applaud the guy for his creative thinking on this issue.

For those of you that DIDN’T want to be directors in high school and/or college (both of you), showing your film in local theaters can be extremely annoying and complicated. You have to have you film on whatever tape media they need for their projector…and there are half a dozen tape options…all of which cost a hefty sum to have your film transfered to. Especially if you have a big enough budget to shoot in HD (which can still be an insanely small budget).

What this guy did was encode his film with H.264, and 5.1 Surround Sound, and was able to still keep his much desired HD resolution. As a result he was able to use the AppleTV as an extremely inexpensive solution for getting his film into digital theaters.

It’s actually a pretty genius idea. Sure, he could carry around a laptop to do the same thing – but a laptop is WAY more expensive, and typically doesn’t have any of the component or HDMI outputs that the AppleTV has available on it.