Brydge Turns Your iPad Into a MacBook Air

Boy oh boy, is Kickstarter becoming the go-to place for the most innovative Apple accessories. A few weeks ago, I told you about the Pebble e-ink watch. Just this week, I reviewed the Cosmonaut stylus. Today, I’m going to tell you about a smart new iPad cover with a keyboard that transforms your iPad into a MacBook Air-like laptop.

It’s one of the holy grails for Apple fans: the marriage of the “magical” iPad with the convenience of a laptop keyboard. Earlier this week, Apple CEO Tim Cook denied that the company has any plans to converge their Mac line with iOS devices. But that doesn’t mean third-party vendors can’t make it happen with the right accessory, for those who want it. 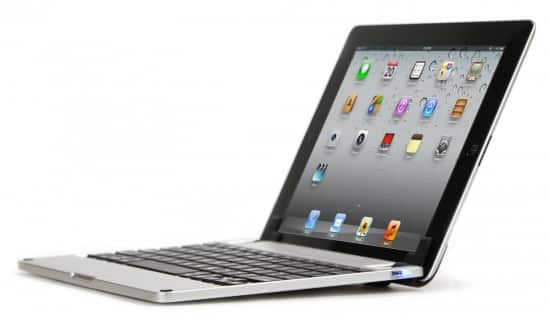 Brydge might just be the best contender yet for taking the “iPad laptop” crown. It’s a MacBook Air kind of keyboard attachment, but it matches the footprint of the iPad precisely, and it lets you swivel your iPad just like a laptop’s screen. It’s made using the same grade of super-strong “brushed metal” aluminum that Apple is so fond of, so that when the iPad is docked in the Brydge, the two pieces look like a single device. The keyboard even looks for all the world like an Apple keyboard, with black keys arranged exactly the way they appear on a MacBook. (There’s no word on whether the keys might be backlit, but I’m guessing probably not.) 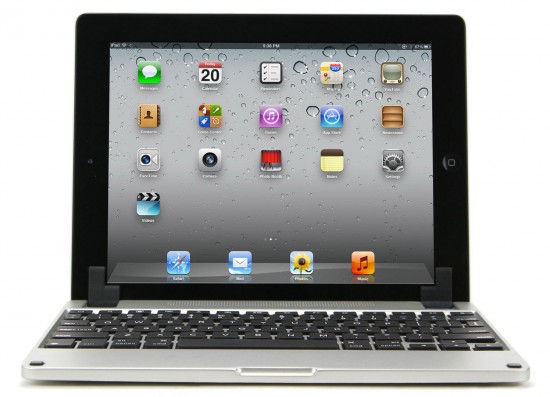 One thing the Brydge does bring to the table that no other iPad keyboard/case has — aside from the convergence factor — is a stereo speaker. This is entirely optional, and affects the product’s price, but it’s said to amplify the iPad’s own meager stereo considerably. You simply snap your iPad into the built-in clamp, which uses a combination of friction and magnetism to hold your iPad in place. There are no plugs or wires to fiddle with; instead, Brydge connects to your iPad via Bluetooth. Once you tether the two devices together in System Settings, you’re good to go. Brydge even puts your iPad to sleep when you close it, just like Apple’s Smart Covers.

To really get a feel for how the whole thing works, you need to watch the Brydge video above so you can see it in action. You might think that adding a keyboard would make your iPad less portable, or a little harder to navigate (since the screen might be a bit further away than usual), but the video makes it look like a happy marriage. The folks behind Brydge say that when Brydge is connected to an iPad, the combo device is nearly the same thickness as a MacBook Air.

Other specs: Brydge is 1.28 pounds, so when attached to an iPad 3, its combined weight is 2.72 pounds. That’s still less than the 2.96 lb. weight of a 13″ MacBook Air. Brydge has a battery that’s charged via a micro USB port, and its makers claim that while specs on the version with speakers are still being determined, the non-speaker version will last “several months” on a single charge. That’s darn impressive.

Brydge surpassed its $90,000 goal after just one day on Kickstarter, and there’s well over a month still to go, so this thing is a done deal. Brydge’s makers are treating the Kickstarter project now as a pre-order campaign, and it’s the only way to guarantee yours now. They hope to ship the product around the middle of October. The current minimum pledge is $170, which will get you a Brydge sans speakers. If you want the version with the speakers included, it’ll run you at least $210. There’s no word on what the standard prices will be once it goes on sale, but it’s a given that it’ll be higher than the Kickstarter pledge amounts.

Pebble still holds the all-time record for a Kickstarter fundraising project, standing at $6.6 million in pledges at the time of this writing (with 22 days to go!). Brydge may never quite reach those heights, but it’s already clear that this is going to be one highly coveted accessory.