Apple using ‘Microsoft-like’ moves to get Safari on Windows Machines 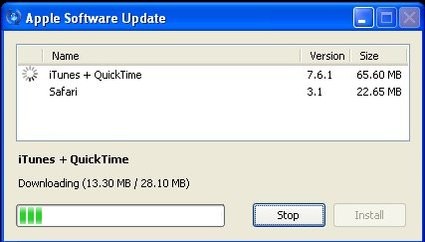 This is one of those stories that you just know is going polarize the audience. The hardest of hardcore Apple fanboys have probably already fired up Mail to send me hate e-mail about how I should die for writing a title like that…but it’s 100% true.

On Windows, Apple has decided to push Safari through to iTunes and Quicktime users. The Apple software update application will now constantly remind you to install Safari 3.1 until you finally give in an do it.

It’s a shady way to get your numbers up on installations.

“but…” you say, “lots of other companies do that – why are you picking on Apple?”

um…because this is an Apple blog.

Also, because the “everyone else is doing it” line doesn’t work with me. It didn’t work for my mother when I was 4 either. Just because everyone else is pushing their software down the pipe to users who didn’t ask for it, that doesn’t mean Apple should be doing it.

To put it in perspective, how would you feel if your next update to Mac Office suddenly included a nag screen to download IE8 for Mac (if there was such a thing)? My guess is, you’d get tired of it.

Basically, the next time Steve Jobs announces the number of Safari users on Windows, you can take that number than throw it out the window…because it won’t be accurate. Not all Windows users are un-tech savvy, of course, but a large number of them are, and they will install Safari just to make the nag screen go away…if they even have the forethought to uncheck the install box to begin with – regardless…it’s shady, and I don’t care for it.

thanks to tuaw for the image.