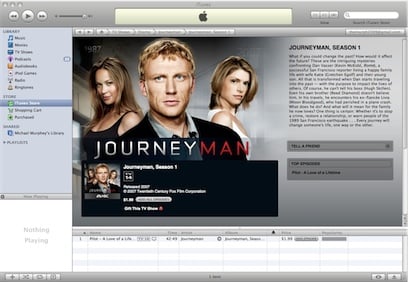 There seem to be differing views online about what the addition of new NBC shows Chuck and Journeyman mean for the deal between Apple and NBC.

It appears to me that NBC is getting its way – to a degree. After Apple decided to pull all new NBC shows, NBC came back a few hours later and said that their shows WOULD be appearing in iTunes, and they were going to use their current contract with Apple and make sure it was honored.

My guess is, Apple can’t keep these shows from appearing in iTunes due to the contract…but what’s really interesting is what ISN’T there.

One of the most downloaded shows in iTunes debuted its season right along with Chuck and Journeyman on Monday night – but you don’t see it in iTunes.

What’s more interesting is that, while Chuck has a season pass available that includes the entire first season – Journeyman appears to only be available per episode. I don’t know if that’s because NBC has more confidence in Chuck lasting a full season, or not.

Honestly, I find the whole thing tiresome. I firmly believe NBC is being trite and obnoxious about the entire situation, and that their actions only encourage piracy. I think they are shooting themselves in the foot, and that they will ultimately regret this whole thing…but I could be wrong – only time will tell.