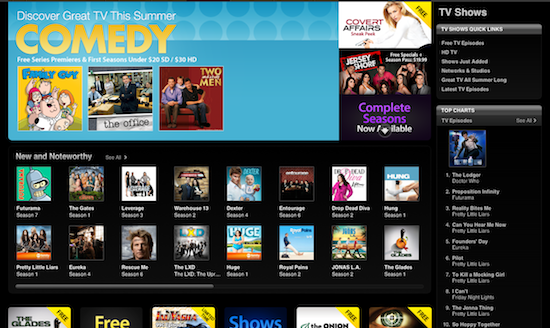 There are quite a few people out there who have official cut the cord with the big cable companies, instead deciding to go with Hulu and iTunes for their daily dose of TV. Frankly, it’s something that I’ve considered doing myself. I pay $90 a month to DirecTV, and I don’t have anything special with the exception of Showtime, mostly for Dexter. Sometimes, I really wonder where that money is going.

I’ve heavily considered going the iTunes Season Pass route, but I didn’t think it was cost effective. Besides, I don’t want tons of TV shows littering up my hard drive, particularly when space comes at such a premium. There’s also the “live” problem, which mostly is a problem with news and sports. Now though, there may be an option that works for me, and others as well.

Rumor has it, Apple is working on setting up a 99-cent rental cost for TV shows. I first found out about this viaÂ PC Magazine:

Insider sources are saying that Apple’s is looking to launch a new streaming rental service that would give consumers the opportunity to watchÂ TV episodes for $0.99 a pop. That’s half-off a typical standard definition episode purchase at $1.99, and one-third that of a high-definition episode buy ($2.99).

Ryan Lawler ofÂ NewTeeVee has the details of the plan: users would be able to view a rented episode within 30 days of the purchase but, once they start watching, the 24-hour countdown clock begins. As well, users won’t actually be downloading the video itselfâ€”it’ll stream right through iTunes, analogous to how one currently watches videos on YouTube or Hulu.

The rumored move comes in the wake of equally rumored suggestions that Apple’sÂ planning a major overhaul to its Apple TV service, potentially developing a new, $99 device that runs its iOS operating system and sports FlashÂ storage in iPhone-like capacity ranges instead of a physical hard drive.

This would solve part of my problem with cable, but not all of it. If I wanted a little bit of both, I could drop down my DirecTV plan to a lower level, then subscribe to my favorite shows via iTunes to save some costs. Will it work? Until this rumor becomes true, we’ll never know. I’d love to find out, though.