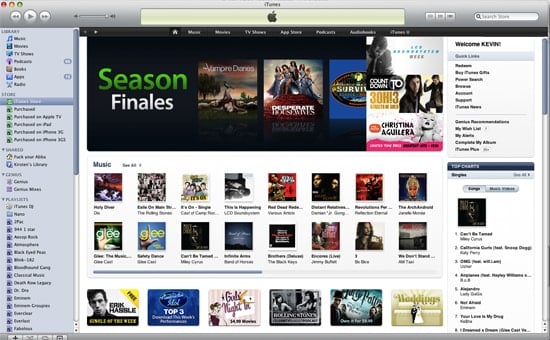 A recent article published in Billboard, then clarified in Fortune, mentions that iTunes has increased their market share of the music market, up from 21.42% in 2008 to 26.65% in 2009. The first glaring thing that I noticed here was in the first paragraph of the Fortune article:

Songs streamed directly to cellphones, once touted as the next big thing in digital music, failed to take off and is now rapidly losing ground to Apple’s (AAPL) iTunes Store.

I understand that they’re talking about other systems, but the iTunes store does stream music to a phone, it just happens to be one phone.

I guess I’m not really sure why this is a bad thing, because the tone of the Fortune article seems to be that the world is ending because Walmart doesn’t have a bigger share of the pie. Maybe I’m just reading too much into things (I’ve been known to do that) but to me, this is kinda awesome.

The only CDs that I’ve purchased in the past five years are ones that are out of print, not available on iTunes, or from indie artists. Otherwise, when I find a song or CD that I want, I go on iTunes and download it. And why wouldn’t I? I then have access to the music on my iPad, iPod, iPhone, and both computers. I can even send it to my AppleTV if I want to listen to music on the TV – something I’ve never really understood.

Now this is a problem if you don’t own an iPod I suppose, but then you have other options. Let’s say you bought yourself a Zune. You’ve got the Zune Marketplace for music and apps, and then you can burn your own CDs into the Zune interface. It’s just as convenient. Or if you don’t even own an MP3 player, you can just buy regular CDs. Sure, brick and mortar CD stores are all but gone, but big stores like Walmart and Best Buy are going to be carrying hard copies of music for the foreseeable future, so you’ve got options there.

I suppose this is also an issue if you’re worried about Apple taking over the world. I have no problem with running my music through iTunes, but I know people who do. If you want to run something other than iTunes, then support a platform. Right now I can’t think of many real competitors to iTunes in functionality, but I’d love to have one. Competition breeds innovation, and the more competitors Apple has, the better it is for all of us. I hope Zune catches up so that Apple starts feeling the pressure and changes things up. Nothing wrong with that.

I will get scared when Apple owns 50% of the market. Why? Because that means no one is even trying to take on mobile music, and at that point, people are going to start throwing around the “M” word about them.

In the meantime, I’m going to enjoy my easy access to music, whether it has DRM or not, and hope that someone tries harder than the competition is currently.