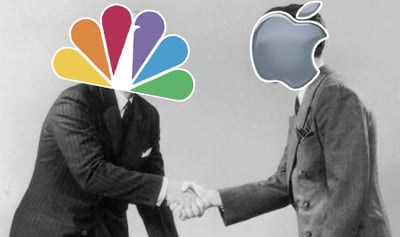 You may remember the little spat that NBC and Apple had last year. It ultimately resulted in all NBC programming being removed from iTunes and got so out of hand that the companies shot insults back and forth from NBC CEO Jeff Zucker saying that Apple “destroyed the music business” and Apple even attempting to drop NBC content before their mutual contract even expired. It was like blog drama, but with giant corporations.

Well, today the Financial Times and Business Week have a pair of interviews that have the two companies basically kissing and making up – or at least indicating that they’re going to do so in the very near future. In the Financial Times NBC CEO Zucker says “We’ve said all along that we admire Apple, that we want to be in business with Apple.” That’s not new, but then there is this little addition. “We’re great fans of Steve Jobs.” That’s high praise for the “destroyer” of the music business.

Business Week also has some words with Jobs today, and he had this to say about the Apple/NBC situation. “We’ll put it back together on the TV thing. Everybody lost. But NBC is a great company, and Apple is a great company.”

So it sounds like things are on the mend between the two companies. It’s a shame the big studios and the writer’s can’t do the same thing. Then we might actually have some content in iTunes worth downloading.