‘Michael Clayton’ hits iTunes the same day and date of... 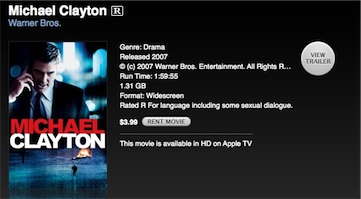 When Steve Jobs announced rentals in the iTunes store, he made it clear that titles would be added 30 days after their DVD release. Well, that doesn’t appear to be so for EVERY title. “Michael Clayton” starring George Clooney was only released a few days ago, and yet – here it is – in iTunes, available for rent. In fact, it hit iTunes the same day as its DVD counterpart.

Perhaps not every studio feels that a 30 day wait is necessary for every title. I would imagine that this particular film was added because of the Oscar buzz around it. A buzz that will be killed this coming Sunday if the film doesn’t take home at least a few of those 7 nominations.

I hope that the studios see the benefit of having the movie in iTunes this early, and decide to continue the trend.

So far, I haven’t seen any other titles released this early – have you?