Why do we (Apple Users) NEED the Zune so bad? 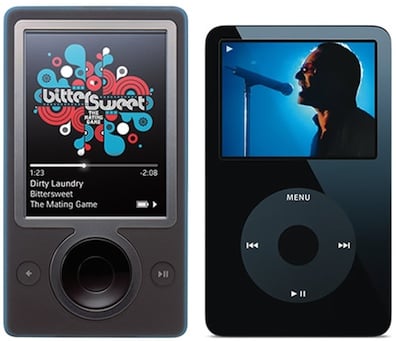 It’s rumored that the new Zune may launch today.

Well…we do, for some reason. If you go looking around the Apple blog-o-sphere, you’ll see Zune related posts on every single blog. Now, I know you’re going to say it’s because the Zune is a rival MP3 Player and is, thus, worth covering.

But that’s a load of crap, and you and I both know it.

The Zune is worth covering because it’s made by Microsoft. We NEED that rivalry to feel that all is right in the world. Let’s face it – it just wasn’t as much fun when Microsoft wasn’t in the MP3 player market. We didn’t have an enemy.

I mean, seriously – has anyone ever cared on way or another about the iRiver? Can you even name another MP3 Player? I can’t. I know Sony has some that are called Walkmans but that’s about it. We don’t care about Sony vs. Apple or Creative vs. Apple….we care about Microsoft Vs. Apple.

If the Zune 2 launches today (and it might, it could have launched by the time you read this) it won’t affect the iPod one bit. If Microsoft pulls a touch enabled Zune out of a bag, it’ll only be considered an iPhone/iPod Touch rip off. If they don’t…it’ll look old an out dated coming out of the box. It doesn’t matter what Microsoft does today, we’ll all call it a rip-off of Apple…and if any of us DARES to say that the Zune might have legs…he will be thrown to the wolves (I say he, because women are smarter than we are – and they don’t care about this junk as much).

We need the Zune, because of some reason, it’s just more fun to have the rivalry…and, for that reason, I hope the Zune does well…and is around for a long time to come.