iPod Vs. Zune – Will there even be a fight?

by Michael 16 years ago8 months ago
2 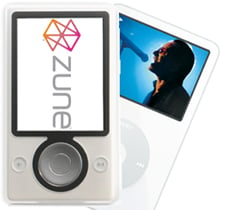 The More I see about the Zune, the less a threat I think it is to the iPod. When I first heard about the Zune and the features that it was going to have, I was impressed.Â  I really thought the player might have a chance to enter the game and make a name for itself.Â  The idea of it having WiFi was interesting, and I’ve always wanted an “All you can Eat” option for my iPod…plus the Zune had a bigger screen.Â  Things were looking up for the Microsoft player…but the proof is in the pudding so to speak, and the more details creeped out about the Zune the less impressive it got.

For example…that bigger screen?Â  That’s great, but the resolution is the same as the iPod.Â  So…while I would still give the Zune a SLIGHT edge for the extra screen real estate,Â  I can’t say it would be a factor that would convince me to buy the device, and the Zune has little else going on for it.

The “social” aspects of the device don’t appeal to me, and I can’t really see them being all that appealing to anyone else.Â  I mean, yeah it’s kinda cool to be able to send your buddy a song that they can listen to (3 times or 3 days…whoopee) but is that worth the extra bulk of the device?Â  You can check out some comparison shots of the Zune’s size compared to the iPod right here.Â  The thing is substantially bigger.

Now, don’t get me wrong…I am fully aware of Microsoft’s pockets, and how deep they are.Â  I also know that this is only round one of the battle.Â  I’m sure the Zune 2 will be a much more impressive system, and if they can make a better product than the iPod, then I’m not opposed to buying it…but they still have a LONG way to go.