If HTC sues Apple over Touch name, does Apple get... 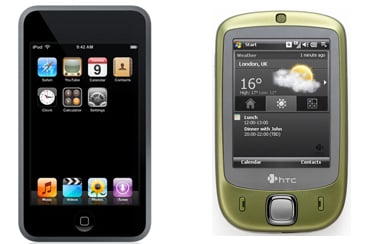 The buzz around the web today is that HTC may have a case against Apple over the term “touch” being used for the new mulit-touch enabled iPod. First, it’s important to point out that HTC did not bring this up, it was a trademark lawyer that was either asked, or volunteered the idea that HTC might have a case.

Beyond the fact that this is ridiculous (in my opinion, anyway) if HTC were bold enough to try and sue a company they just completely ripped off, Apple could fairly easily file a counter suit in regards to the functions and features of the HTC Touch.

For the record, HTC chief Peter Chou has said he believes that the Apple device’s name is a compliment to his company’s own naming scheme, but has refused to officially comment about the possibility of a lawsuit.

It has been added that the fact that the iPod Touch and the HTC Touch have similar functions such as in its media playback, touchscreen, and Wi-Fi functions may be enough to spark a suit by itself. Personally, I think if anyone is going to be filing that suit, it will be Apple. The HTC Touch debuted in July, mimicking many of the iPhone’s features and functionality.

I seriously doubt anything further will develop from this, but if it does, it will certainly be interesting.