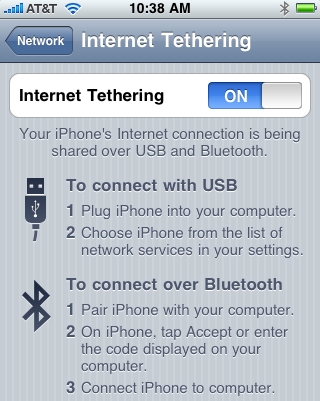 I really want to tether my iPhone.

More than anything, I really want AT&T to flip the switch and support tethering on the iPhone. After all, they promised they would do so by the end of 2009, now here we are, 2 weeks into March 2010, and no tethering. Apparently, I’m not the only one who’s noticed that.

Of course, that’s not a problem in other countries, because some of them have providers that **care** about their customers. Some of them are already using tethering to their advantage, which brings up a legitimate point: will the iPad be able to tether with the iPhone?

Apparently, Jezper SÃ¶derlund of Switzerland thought the same thing. According to Apple Insider, he sent off a quick e-mail to Steve Jobs to ask him about the situation. The answer? Well, why don’t you just read the question first.

I’m Jezper from Sweden, a long time Apple fan, currently about to replace the very last computer at home with a brand spanking new iMac i7. I’m also awaiting the release of the iPad. However, I have one question:

Will the wifi-only version somehow support tethering thru my iPhone?

Two devices, based on the same OS, with already built-in technology to share one data plan suggests a secondary contract could possibly be redundant.

From the look of your keynote, where the iPad sits well between my MacBook Pro and my iPhone, I was hoping the three of them could interact as seamless as possible.

Wow. I think that’s the most gangster answer I’ve ever seen from a CEO, and I’m not exactly sure why. Regardless, this is a bit disappointing. Two data plans is redundant, and it is frustrating. Then again, it’s not surprising, either. Either way, we still don’t have tethering in the US, so it’s a moot point. Disappointing, yes. Shocking, no.