How to Add and Remove Buttons in the iOS 8... 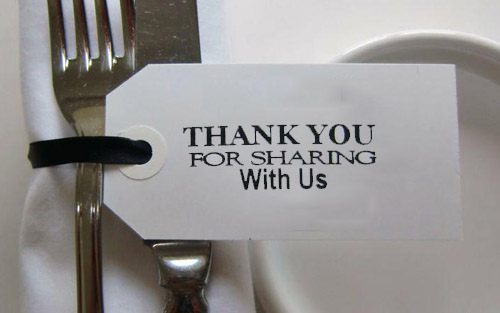 With the release of iOS 8 Apple has started allowing unprecedented access to their mobile operating system thanks to features like keyboards and extensions. Extensions are Apple’s way of letting 3rd party apps play nicely with one another; something it has never allowed before. Now, you can use Pinterest to share your favorite website, or clip an article right to Evernote. However you like to share, Apple now lets you update the sharing panel to better fit your needs.

While adding sharing apps is great, Apple also lets you remove apps from the sharing pane so you only see the items you want. Now, if you hate having Facebook and Twitter available to share with, you can replace them with other more useful apps. It’s actually pretty easy to customize, here’s how.

Adding Buttons to the Sharing Panel

The easiest way to access the sharing panel is to start sharing something. This is most easily accessed in Safari. Head over there and load a web site, it doesn’t matter what site it is. With the page loaded, tap on the Sharing icon in the center of the lower toolbar. 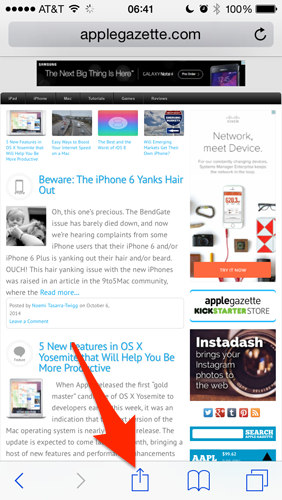 From here, swipe to the left where you see the icons for sharing on Messages, Mail, Twitter, etc. until you see More. Tap on this to continue. 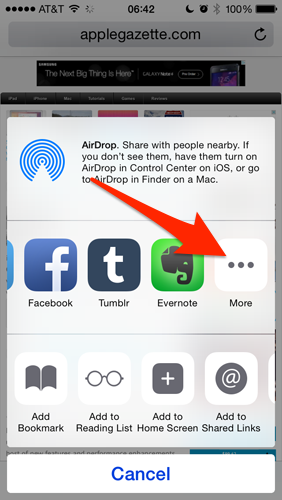 You should now see a list of applications. These are all the apps on your iOS device that can be used to share with. Apps that are turned on will show in the sharing panel and ones that are turned off obviously will not. 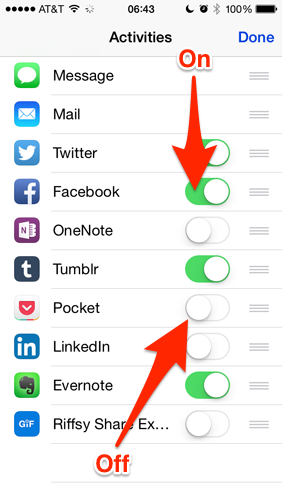 Once you have the apps you want to share with set, you can drag their order so they all show up where you want them. Tap and hold on the 3 parallel lines to the right of each app and drag each until you have the order you’re looking for. 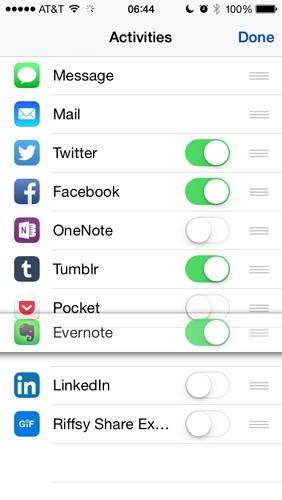 When you’re all set just tap on Done in the upper right corner. Now, your new sharing setup will appear like this in any app you share from, not just Safari.

Now that you know HOW to update your sharing panel, here are some of the best that you can download and use today. 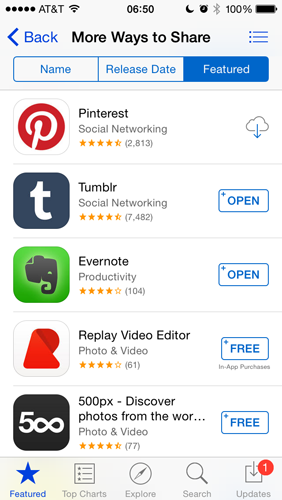 Evernote – The latest update to Evernote allows you to save just about anything that you can share into a new note. Best of all, this app is free.

Pinterest – Can’t get enough Pinning at your desktop? Now you can Pin from just about anywhere with this free app.

Pocket – If you’re not a fan of Apple’s Reading List and want a better way to save articles, look no further than Pocket. This amazing app lets you save webpages to read later.
OneNote – If you’re a fan of OneNote instead of Evernote, then there’s an app for that, too.

The list goes on, but you can check out the Extensions page of the iOS App Store for more great apps. Now get out there and share.