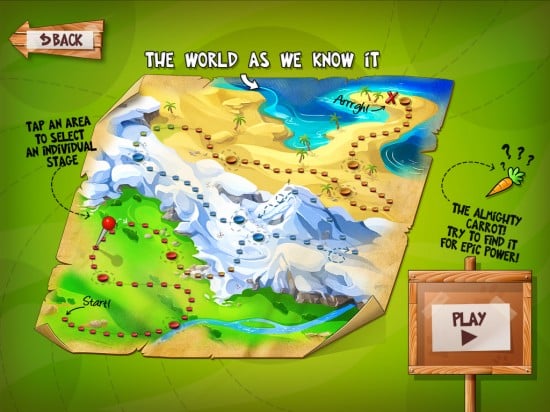 I sat down to try out Riot Rings for the first time, intending to play for fifteen or twenty minutes. Two hours and dozens of levels later, I knew that Cervo Media was onto something special with their clever little action puzzler.

Riot Rings bears some similarities to Zuma and Luxor, with balls that must be fired to match at least three colored balls on the board, and thereby make them disappear. But Riot Rings brings enough twists to the formula to make its own mark. 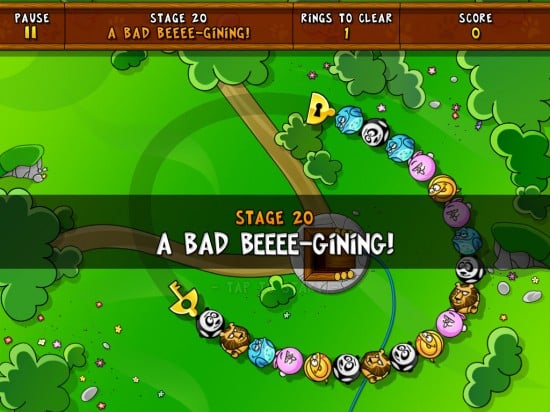 The silly backstory claims that animals have escaped from zoos all over the world, and your job is to return them to their captured states. You do this by matching at least three animals — which are shaped like balls, of course — making them disappear from the screen and return to the zoo where they belong. To fire a ball at the track, just tap the spot on the track where you want the ball to land. What makes Riot Rings different is that, instead of levels that simply change the shapes of their tracks between levels, each level is so different it’s practically a completely different game. With more than one hundred levels to play through, the game’s imagination and variation seems to never end. 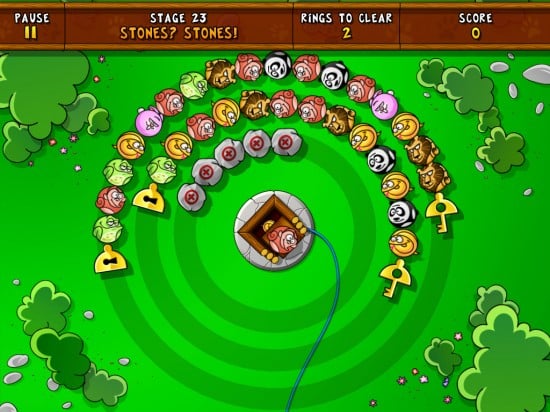 Every level brings some new challenge, some new wrinkle in its basic gameplay, which goes something like this. In the center of the screen is a catapult that you fire with a tap. The tracks are usually circular or oval in shape, but vary wildly, and often change shape as you’re playing. As you progress through the game, you’ll be challenged with multiple tracks, overlapping tracks, tracks that skip or spurt, clouds that obscure the top-down view, boulders that block part of your range of fire, and loads more. In most levels, new animals come flying in to add to the complications, and they can add up fast. That’s bad, because if so many animals are on a single track that the circle closes, you lose. 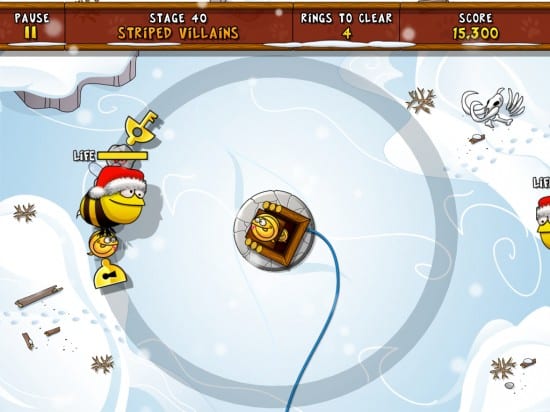 There are other challenges too, like giant bees that fly slowly in and try to destroy the catapult; it takes a lot of animal/balls to destroy bees, so you’ll find yourself tapping those bees like crazy until they finally die. Fortunately, the game helps you out with special weapons that appear now and then to give you an advantage. You might see a hypodermic needle that you can pick up and then throw at an animal track, making it slow down or even stop moving altogether. Or there might be food of some kind, which you can pick up and throw, causing a large number of animals to break free from the track and go off to chase it.

In addition to the campaign, there’s a Free Play mode, which lets you revisit any particular level and replay it to try for a higher score; and a Zen Mode, which keeps the game going infinitely, and tasks you with surviving as long as possible. These three modes give the game a high replay value.

If you’re ready for a new puzzle obsession, give Riot Rings a try. You won’t be disappointed. It’s better than Angry Birds!

[Editor’s note: this review is based on the iOS version of Riot Rings, but there’s also a Mac version available.]