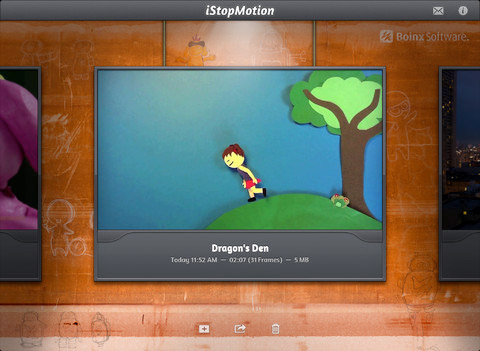 There are dozens of stop-motion animation apps available in the App Store, but it’s harder to imagine one that’s easier to use while still being powerful, than iStopMotion. It also might be the only one made specifically for the iPad.

iStopMotion is characterized by smooth controls that make it simple to create your own animations with one-tap buttons. Smartly designed with user-friendly controls, I can’t imagine anyone that couldn’t quickly and easily create their own stop-motion animated films.

For the artistes among us, here’s a quick rundown of the app’s adjustable settings, a selection of options you’ll find satisfyingly robust: 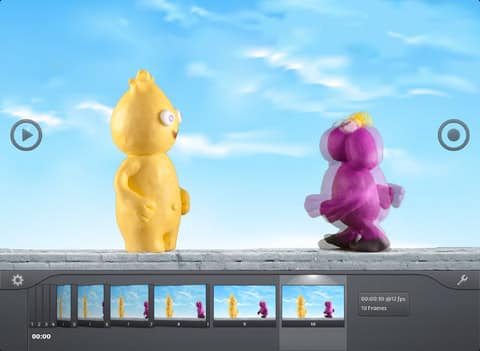 Making your own movie is as simple as tapping the record button on the view screen to snap a frame. Then make your tiny adjustments and snap another frame. Keep going this way, and soon you’ll have your very own movie. To make the process as painless as possible, the camera’s field of view shows a ghostly overlay of the last frame you snapped, making it ultra-easy to match up your frames and make those small adjustments that simulate life-like movement. I managed to make a (rather horribly laughable) short stop-motion film using one of my kids’ stuffed animals, in under ten minutes. With actual time and care put into making a film, I see no limits in this software to what can be made with it.

A timeline at the bottom shows your snapped images the instant you take them. They’re displayed in a clean row like a roll of film, and you just use  a one-finger swipe to navigate them. See one you don’t like? Scroll until it’s highlighted as the current key frame, and then tap the wrench icon. A delete button pops up, along with a “delete all frames” button and a “duplicate” button in case you want to create an exact replica of the current frame. Touch and hold a frame for a few seconds to “grab” it, and then drag it around the timeline to put it somewhere else. 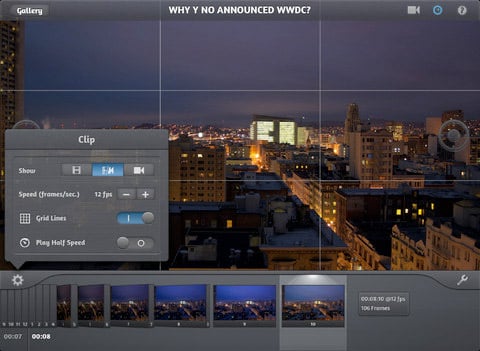 One of iStopMotion‘s best features is its instant replay option. Since all frames are displayed immediately after they’re taken, you can then tap the “play” button to instantly view your animation exactly as it will look in the finished movie. This kind of immediate feedback is incredibly helpful for animators, who can see the changes their latest frames have made without any delays, and then make adjustments accordingly. The entire app seems smartly designed from the ground-up this way, with speed-of-use in mind.

Once you’re happy with your visual end results, you can add a soundtrack. Audio recording isn’t supported inside the app, but using Garage Band or something similar, it’s easy to create your own audio track — using music, vocal recordings, and/or sound effects. Back inside iStopMotion, there’s an editing button that pulls up all of the audio files you have saved on your device. Select the one you want, and the app takes care of the rest. 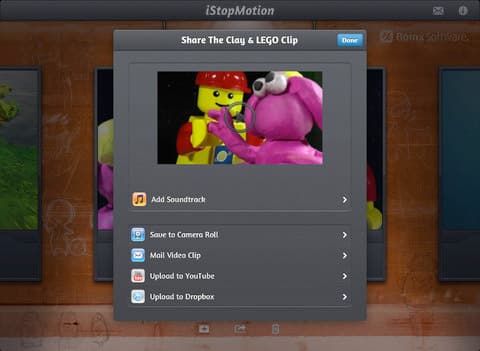 Another particularly nifty feature is a separate “remote camera” app you can download, allowing you to use this main iPad app as a remote controller for a secondary camera app on another device. (The remote camera app works with iPhone or iPad.) This comes in awfully handy since touching the screen to snap a frame can accidentally move the camera. As such…

The only real impediment to great movie-making that I can determine is that the iPad isn’t exactly the world’s most stable camera; a strong, rock-solid holder is a requirement. If all you’re working with is a basic Smart Cover, you’re screwed — your movie will be jittery in the extreme. But if you’ve got something more powerful to hold it steady, you should be good to go.

Sharing is made very easy via Apple’s familiar share button, which gives you the option of uploading your movie to YouTube, emailing it, saving a copy to your Camera Roll, or uploading it to Dropbox. A few more upload options like Vimeo and Facebook would be welcome, but it’s a small quibble, and such options could very well be coming in a future update. There’s also a social aspect to the app, a section featuring curated videos submitted by users.

The iPad has long been criticized as a content-consumption device only. But smart creativity apps like iStopMotion are challenging those assertions with powerful counter-arguments. It probably doesn’t have every bell-and-whistle that pros might be looking for, but it’s a darn near perfect creation tool for your iPad. There’s a kind of joy that only comes from the ideal marriage of creation and technology — a marriage that enhances and realizes the full potential of both things. Even non-animators will find iStopMotion a source of this addictive brand of fun.