by Robin Parrish 10 years ago8 months ago
1

Apple and the City of Cupertino have published revised schematics, floor plans, and renders of the “mothership,” and they’re packed with tons of amazing new details. Here’s an extensive gallery of all the best stuff.

Think you know what’s in Apple’s new wheel-shaped campus? Think again. There’s a separate auditorium and exhibit space. An outdoor amphitheater. A fitness center building. A special set of buildings dedicated purely to R&D (research and development). And more underground structures than the White House. Let me take you on a guided tour.

Here we have a rather lovely wide-angle view of the main office building. 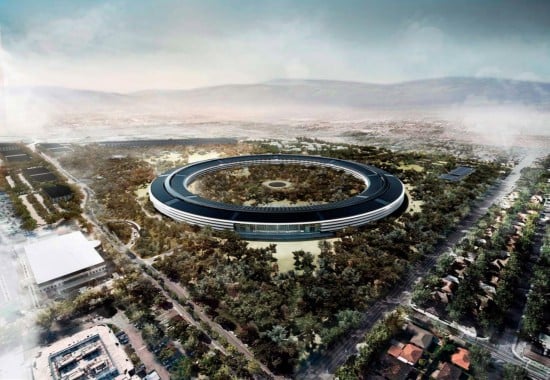 As we zoom in, we also spin around to a different perspective, looking south. Notice the dark-colored, long, straight buildings in the distance — they’re part of the new Apple campus, too. We’ll come back to them later. 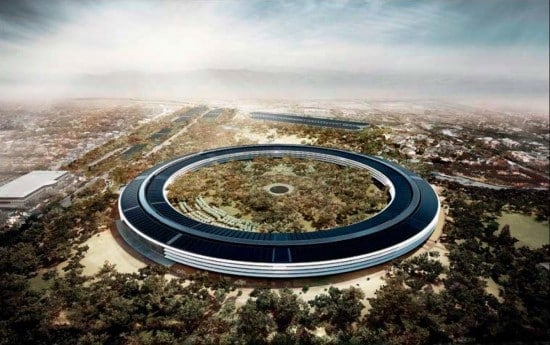 The main thing you’ll notice as we zoom in even closer is the revised rooftop. The original renders featured a much lighter-colored roof. These updated renders show off photovoltaic solar panels that now line the top of the entire building. 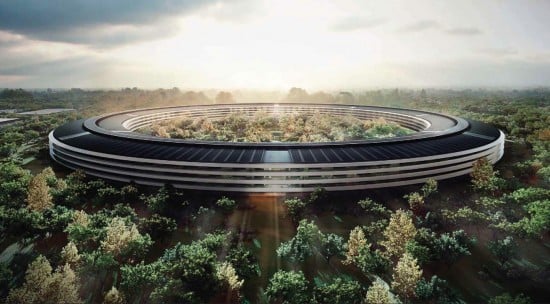 Now let’s swing up above for a look at the entire campus. This first overview is a great image for getting to know the area, as it shows a full render of the entire campus and includes detailed labels on every major area. You’ll definitely want to click-to-enlarge this one.

The primary feature is, of course, the circular office building, but there’s much more to the new campus than you may first think. In the top left corner is the huge new Fitness Center, which I assume will be made available to all execs and employees. The two long, black, pill-shaped structures oriented diagonally near the bottom of the image are the massive parking garages. The square buildings lining the lower right side of the campus are a mixture of more parking, including visitor parking, and R&D buildings. (Interesting that R&D is being separated far away from the main office building, no? Might this be where Jony Ive’s new super-secret Industrial Design labs will be?) The white, ball-shaped building to the lower right of the main building is the entrance to the Auditorium. 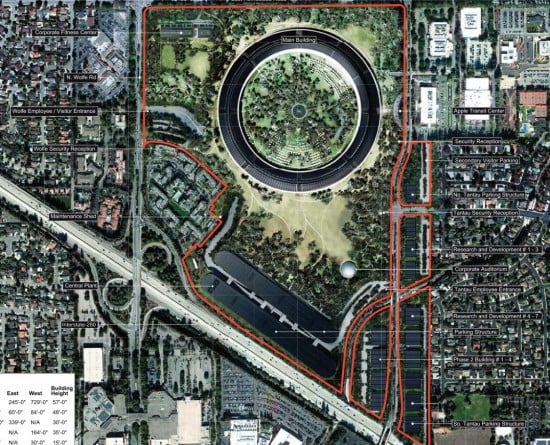 Here’s another look at the basic campus layout. 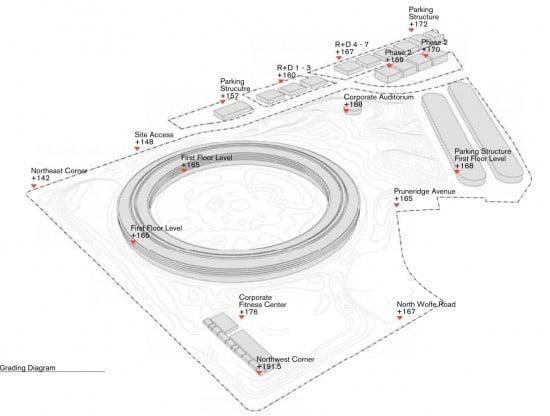 Now this next one is proof of how much I love you, dear reader. Because this thing was a beast to compile, especially at so high a resolution. It’s made from multiple screen captures (about 6 or 7, I think), taken from two separate schematics. It’s not perfect, some lines don’t quite touch in a few places, but it’s the most detailed look at the ground-level floor plans for the entire campus you’re likely to find anywhere. 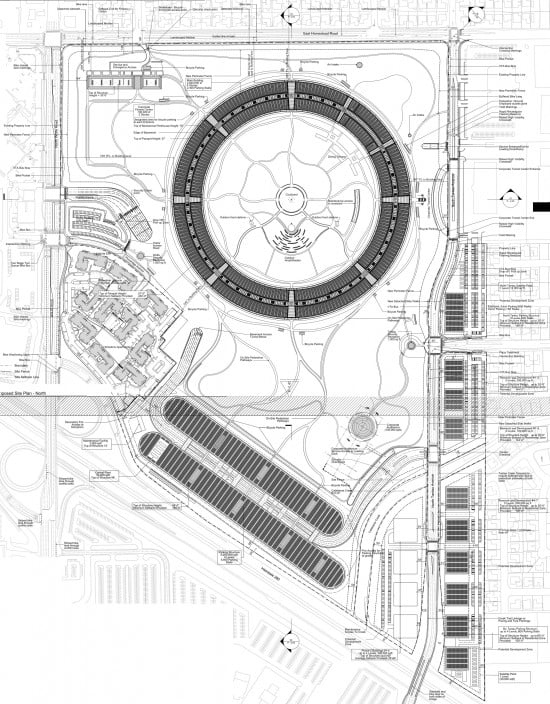 This last top-down view shows yet again just how incredibly detailed Apple and its architects’ planning is for the new campus. (Seriously, these plans alone probably cost Apple a few million dollars.) It’s so detailed, there’s even a page just for the various types of trees and plant life that will be used, and where they’ll be put. This one also gives you a better view of the features of the Mothership building’s outside area that’s situated inside the ring. There’s quite a lot to see there, including a huge fountain/pond, an outdoor amphitheater, and outside seating for the cafeteria. 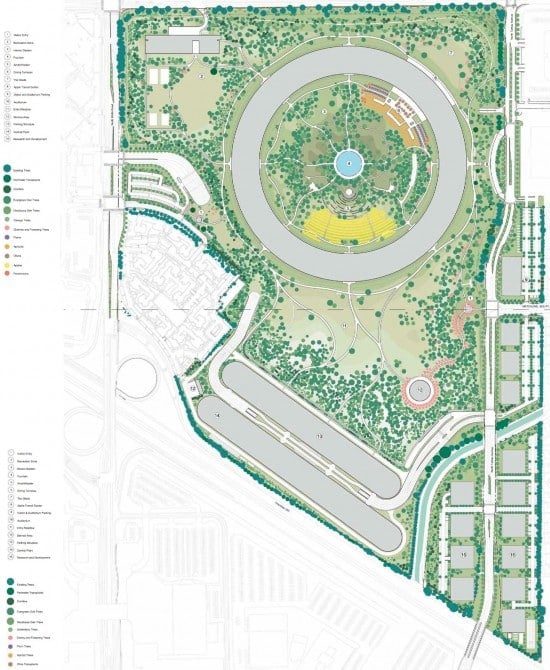 Now let’s zoom in a bit and take a closer look at the office building itself. Here’s a slice of the wheel that includes the huge new cafeteria, office spaces, and other standard rooms. 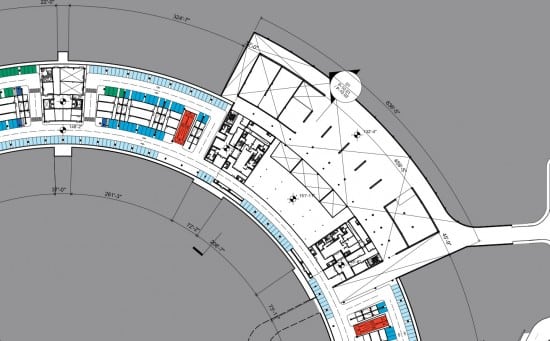 Going down a floor to the below-ground level, you can see the cafeteria’s enormous kitchen is located here, along with loading docks a-plenty. 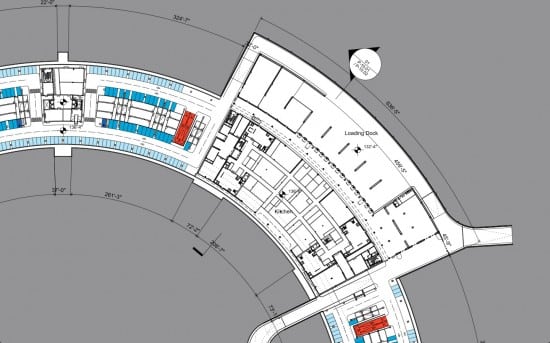 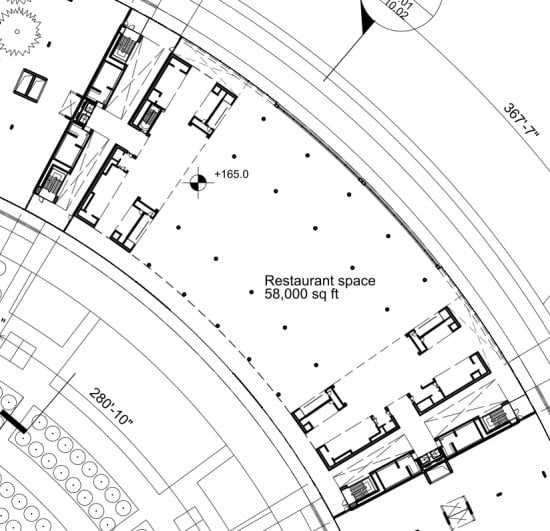 Now let’s cut through the ring vertically and look at a cross-section, or “elevation” view. This is an illustration of the main entrance, which you can see includes tons of lobby space. (Clearly, Apple is expecting lots of visitors at this place.) We’re seeing the lobby from the side in this image, not front-on. 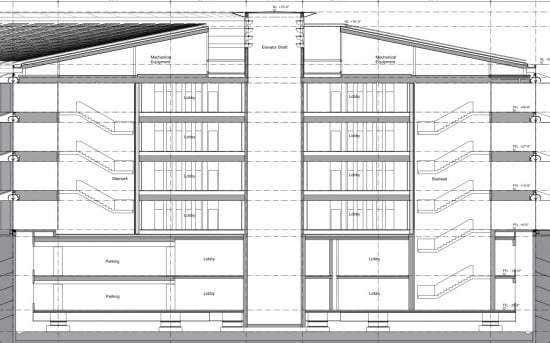 I took a few years of drafting in high school, but I’m no expert on floor plans. So maybe somebody more educated in architecture can confirm or deny: Are those shock absorbing mechanisms of some kind at the base of the building? As in, in case of earthquakes? It would make sense.

Here’s an exterior rendering of what I believe to be this same entrance/lobby area. (This image was part of the original proposal, but this is a much higher resolution version of it, and I believe it’s useful to include here for context.)

Here’s an elevation view of the office areas. 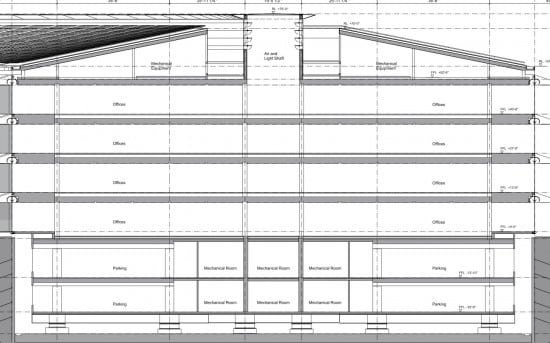 This next elevation gives you a better view of the mechanical areas running through the roofing, as well as the central elevator shaft, which will also be used for venting in fresh air from outside. Also note the two underground parking decks that will run under the entire building. 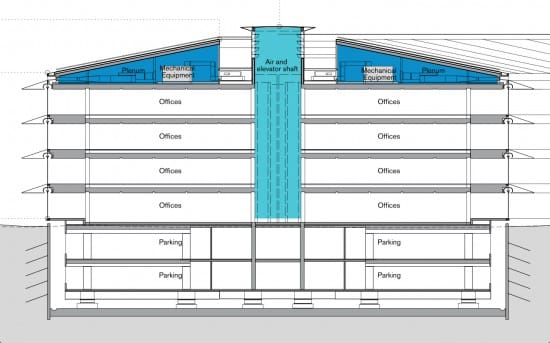 Speaking of the roof, here’s a nifty schematic that shows a breakdown of the incredibly detailed components that make up the roof. This is a top-down view. 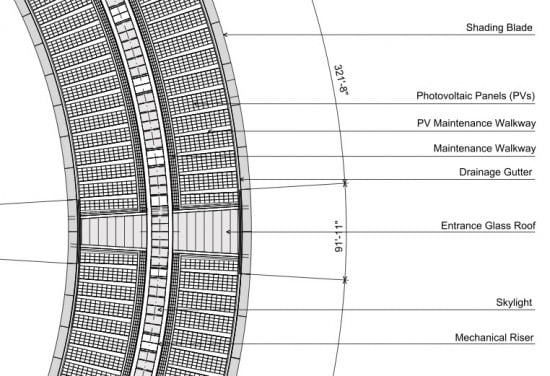 Another elevation view, this time of the massive cafeteria. 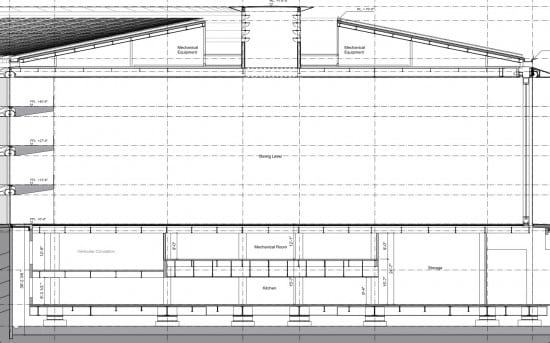 And a rendering of the cafeteria from the outside looking in, for comparison.

Here’s a cross section of the loading dock. Don’t forget, this is entirely below ground. 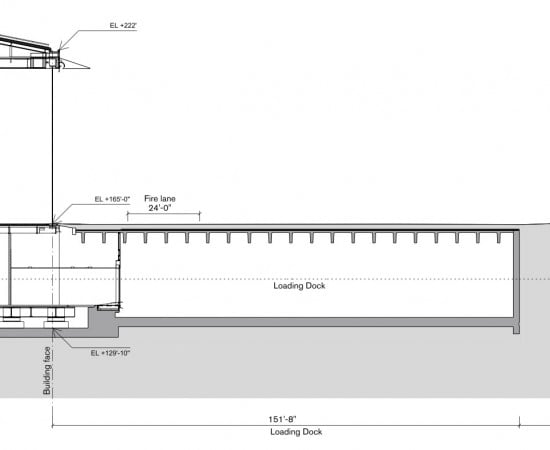 I want to show you two more elevations before we move on to the (very cool) Auditorium. The first shows yet another parking garage, this one located just below ground and appearing to line the perimeter of Apple’s property. 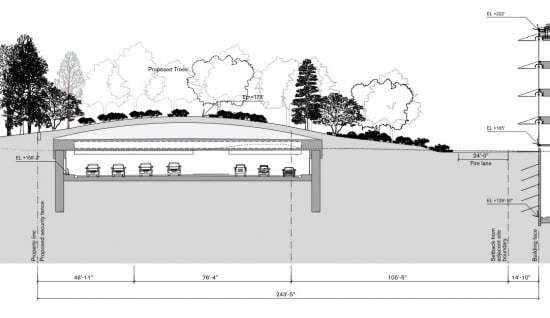 Like I said above, I’m not an expert. But this one shows what I believe to be an underground service road that will snake through the property.

This has got to be one of the coolest features of the entire campus. At first glance on the map, you’d be tempted to think that the Auditorium facility — the new campus’ answer to the current campus’ Town Hall — is the size and shape of the circular structure seen in the schematic below. 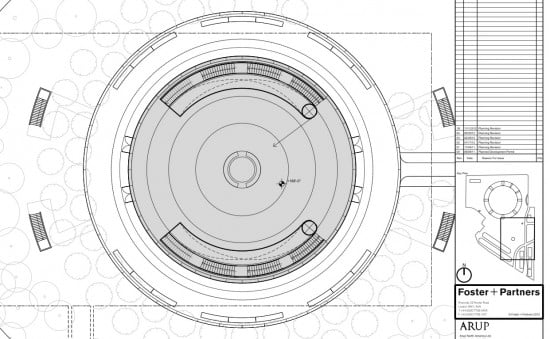 But that’s not the case at all. The circular building above is merely where one enters. A large glass atrium, most likely, with stairs and elevators leading down below ground level to an entirely different facility. That’s right: the new Auditorium is underground. How cool is that?

Check this out — it’s the floor plans for the below-ground part of the building, which is much larger than the part that will be visible from above.

The circular area on the right corresponds to the atrium seen in the prior image. But on this lower level, it’s labeled as “exhibit space.” Interesting. To the left is the actual Auditorium, which includes a 1,000-seat audience, a large stage, an even larger backstage, tech rooms, and more. There are also offices, meeting rooms, a dedicated loading dock, and lots more of those ever-present mechanical rooms. Needless to say, this whole campus is going to be one seriously high-tech place.

Here’s an elevation view of the Auditorium.

Man, I’d love to see some renders of this one.

The other major facility on campus is the new Fitness Center. Details on this one are thin, but like every other building on campus, it includes above-ground and below-ground floors, and has lots and lots of rooms. Here are a few floor plans and an external elevation render. Remember, you can click on all of these for much larger versions.

These are those two long, pill-shaped structures I mentioned earlier. Basically, they’re gigantic, side-by-side parking garages for employees. Together, they hold almost 1,500 cars, and have five floors for parking on, including the roof. All five floors look very much the same, so I’m only including one here.

So the new Apple campus is a pretty amazing-looking place, don’t you think? I hope you enjoyed the tour, and I leave you with a few more renders of the main building’s exterior. (Again, we’ve seen these before, but I think they’re a lot more meaningful in context.)