Apple’s Stock is tumbling after downgrades from Analysts 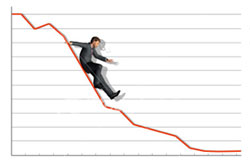 Apple’s stock is feeling the pain of economic crisis that is currently threatening the U.S. economy. Today, after downgrades from two different analysts, Apple’s stock has plummeted almost $20 a share as I write this.

Mike Abramsky of RBC Capital downgraded the company from “Outperform” to “Sector Peform” with a new stock target at $140 – down drastically from his previous target of $200. His reasoning for this is because of a “worsening consumer spending environment”.

Morgan Stanley’s Kathryn Huberty has also changed the status of Apple’s stock from “Overweight” to “Equal Weight” and dropped her target price from $178 to $115. She states that “even in the best of scenarios, AAPLâ€™s EPS growth will decelerate meaningfully from June quarter levels.”

Also – for those of you that are curious I have downgraded Apple’s status as well from “Bigish” to “still-kinda-bigish-but-not-as-bigish-as-I-was-thinking-before”, and I have changed their estimates from “two pots” of leprechaun gold, to only “one and a half” of the wee little man’s treasure.

Truth be told – these people have no clue what sales are going to be like – but it is highly likely that if its harder for American’s to get credit, they will be buying fewer expensive electronic gadgets.

So sometime in the next few days, once this had bottomed out – MIGHT be a good time to buy (not that I’m giving you investing advice…because I’m not. I know even less than these goofballs.)