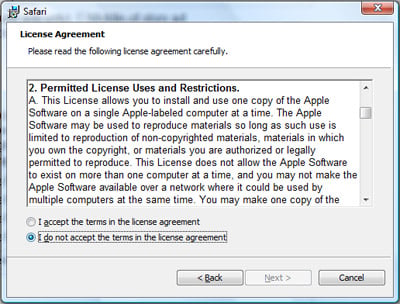 Earlier this week, Apple got a little heat from a variety of sources (including me) about having Safari pop up through the Apple Software Update on Windows machines, even if you don’t have it previously installed on your PC.

Now, though, there is another little problem on the Window’s side of things that is, frankly, just plain funny.

According to the WINDOWS Safari license you are only allow to install Safari on “a single Apple-labeled computer at a time.” Which means by simply installing the application you are breaking the law.

I mean, come on – that’s funny…right?

UK paper The Register has, thankfully, consulted a lawyer and determined that you are in no danger of getting sued by Apple should you install Safari, because of a ” impossibility issue”. “You can’t enforce a term that’s impossible.” according to their source.

Update: Apple has quietly changed the licensing agreement according to MacNN. It now reads “allows you to install and use one copy of the Apple Software on each computer owned or controlled by you.”