Apple DOES care about its customers – no matter what... 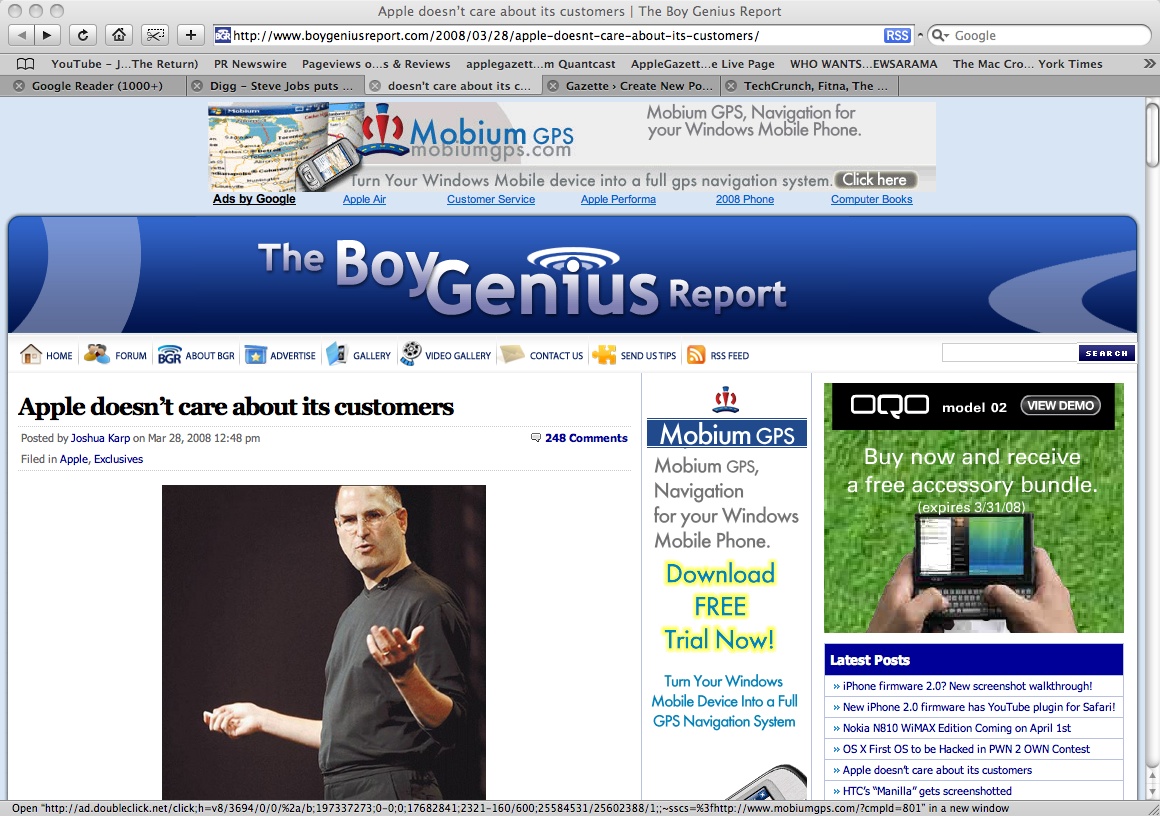 You know, sensationalist headlines are nothing new. There was a time, before blogging became a business, where that kind of thing was frowned upon in the blogging world – but that time has passed. This weekend Ahmed at Tech Soapbox wrote a great piece about just this subject. You can read it here.

He’s responding to a situation that occurred over at TechCrunch. Today, I’m writing about the same subject because of a totally different kind of sensationalist headline over at Boy Genius Report. They titled an article “Apple doesn’t care about its customers” because Apple is refusing to assess the repair damage of a Macbook Pro for free for a customer who openly admits that the water damage is his fault. That’s sensationalism at its best – and its reaching too.

Apparently a “friend” of Boy Genius Report spilled water all over his Macbook Pro – then was very upset to discover that it was going to cost him $300 to have it look at. The email and response are listed below:

I wanted to write and express my concern about some recent problems that I have had with Apple Care. This week, my MacBook Pro unfortunately sustained water damage. I understand this is entirely my fault but it is still something I would like to get fixed. After three or four calls I was finally able to get a straight answer. While I was happy to get a straight answer, I was not at all happy with the answer. It is very worrisome to me that the only way to get my computer fixed is to pay almost $300.00 up front with no guarantee that this will fix the problem. I was horrified to learn that their is no system to assess the problem and bill once all damage is known. I am reluctant to put money into a problem that could easily grow. I have had three Apple computers in a row. I love using them but I am not sure if my replacement will be one. I feel powerless in the situation and the whole experience has turned me off of the Apple company.

This is what happens when your MacBook Pro sustains water damage.They are pro machines and they donâ€™t like water. It sounds like youâ€™re just looking for someone to get mad at other than yourself.

Now, first and foremost we don’t know for sure that this is even real. We only have BGR’s word to go on – but I’m going to assume, for the rest of this post, that it is – in fact – an actual email from Apple.

Is it a sarcastic response? Yeah, it is. Does the email that was sent to Apple politely threaten to stop using Apple computers and switch back to Windows if the company doesn’t agree to assess the problems with his Macbook Pro for free? Yeah, it does.

You can judge for yourself on how you feel the response was handled.

What I can say about Apple, however, is that they do care about their customers. If they didn’t they would have worked with me over the last several weeks over my own experiences with my Macbook Pro. My machine was (and still is) defective because of a parts problem within the machine, and even though I was 3 weeks out of warranty when this whole thing started – they have seen fit to fix it for me at no cost. It has taken longer than I would have liked for the problem to be fixed, but it is a very rare problem – and they have worked with me the whole way on it. Again – without charging me for it.

What’s the difference between my problem and the BGR problem? Mine is a quality issue with an Apple product. Theirs is a guy who water damaged his Macbook Pro.

Now, granted, this post is a little more “fanboy” than I normally go on this site -but my problem here is not with posting about the email or the response. My problem is with the sensationalist and inaccurate headline post by BGR. Of course – I may be over reacting. It is 3am.