You are here: Home / Feature / Review: Targus Stylus for iPad 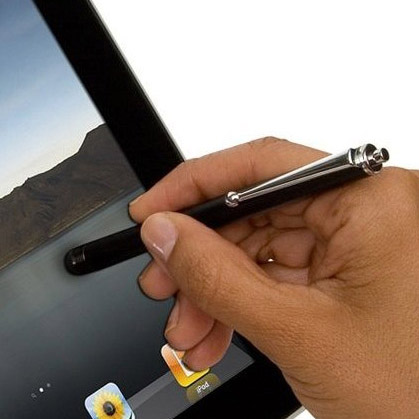 Despite Steve Jobs’ wishes for finger-only input devices, there are a number of tasks on your iPad or iPhone that are made considerably simpler with the use of a stylus.Â I’ve been using Targus’ acclaimed Stylus for iPad extensively (and almost exclusively) for the last week, and the verdict is positive.

Prior to getting my hands on the Targus Stylus for iPad, I’d heard a lot of good things about it. It’s one of the highest-rated styluses among users and critics, so I was eager to see if it lived up to the hype.

I tried it out with a number of apps, emphasizing productivity apps for things like sketching and handwriting, as well as some basic games like match-3 or crossword puzzles. Most especially with drawing, it worked like a dream. My first-generation iPad couldn’t always keep up with my strokes, but its accuracy was spot-on perfect. It was great at handwriting, too (though handwriting on capacitive touchscreen devices is always doomed to frustration, since you can’t let any part of your hand touch the screen while you’re writing). It also worked well with Apple’s built-in virtual keyboard, though of course one-finger (or stylus) typing is by definition slower than using two or more fingers. It felt good when turning virtual pages in iBooks or Kindle, too.

It’s best feature is its most important: the rubber tip. It’s a hollow bulb design (just like most touchscreen styluses), made of black rubber. A good touchscreen stylus needs to have just the right combination of rubber consistency so it slides smoothly across the glass surface, good rubber flexibility so its hollow ball form squishes just the right amount to simulate the human finger, and tightness in how it’s attached to the handle of the stylus. If any one of these factors is off even just a fraction, the user will feel it with every stroke or tap. Targus’ Stylus for iPad gets that magic formula just right, or as close to perfection as any stylus has ever come. It provides such perfect tactile interaction thatÂ I was surprised to find myself using the Targus Stylus for tasks that didn’t require it. By adulthood, we’re so programmed to use pens or pencils for so much of what we do, there’s something about using that same form factor to navigate my iPad thatÂ just feelsÂ right.

It’s not a perfect accessory. At just under four and a half inches, it’s a little on the short side. I wouldn’t have minded it being longer, to feel more like an actual ink pen or pencil. It’s also remarkably lightweight. Don’t get me wrong — I never felt like I could break it or anything. It’s nice and solid. But it weighs less than half an ounce, which combined with itsÂ minusculeÂ size, caused me a bit of concern that I could lose it quite easily.

As I said earlier, I’ve only been using it for about a week, so I have no idea how it will hold up over time. Rubber is far from indestructible, so I assume that eventually it will wear out. (It comes with a one year warranty.) It comes in a number of colors, but currently no other sizes.

The Targus Stylus for iPad (which also works just as well with iPhone and iPod Touch) is not a replacement for the human finger. But it might just be the best augmentation tool available. If you want to expand what your iDevice is capable of — particularly when it comes to art or handwriting — a stylus is a must, and a few nitpicks aside, this is the best one I’ve ever used.