Apple Was Unfairly Criticized for Delaying iTunes Release of “The...

by Kraig Becker 8 years ago9 months ago 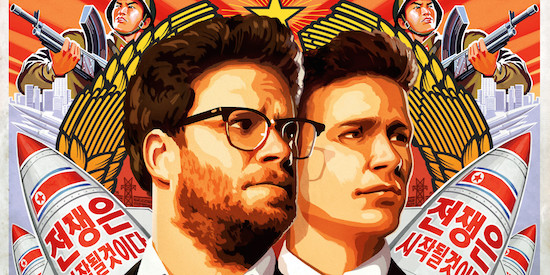 One of the biggest news stores of 2014 was without a doubt the attempt by a group of hackers to blackmail Sony Pictures into stopping the release of the movie The Interview. The comedy, which stars Seth Rogan and James Franco, revolves around a fictional – and farcical – attempt by the CIA to assassinate North Korean leader Kim Jong-Un. The hackers did everything within their power to keep The Interview from being released, even threatening to bring violence to any theater that actually showed the film. For a time, it looked like they had succeed in their efforts, but just before Christmas Sony announced that The Interview would be shown in select theaters across the U.S., and would be available to stream online at YouTube, Google Play, and on Xbox Live. Conspicuously absent from that list was iTunes, which raised more than a few eyebrows at the time, and brought some unfair criticism down on Apple as a result. Here’s why much of that criticism was completely unwarranted.

When news of the online release of The Interview broke, many people naturally assumed that it would appear on iTunes. After all, Apple’s digital content store is the largest on the Internet, with a huge audience that accesses it on a daily basis. It seemed like a natural fit for the film to appear on the service as part of its Christmas Eve release schedule. When the list of online streaming services that would host The Interview was released however, iTunes was not one of the options. This left many people wondering why the movie wouldn’t be available on any of Apple’s devices, but would  appear on smaller, competing services instead.

A report from the New York Times only added fuel to the fire by indicating that Apple “was not interested, at least not on a speedy time table,” in hosting The Interview on iTunes. That statement led some media outlets, including a few high profile tech sites, to criticize Apple for not standing up to the hackers. The feeling was that by not releasing the film on iTunes, Apple was failing to take a stand against the efforts to blackmail Sony. 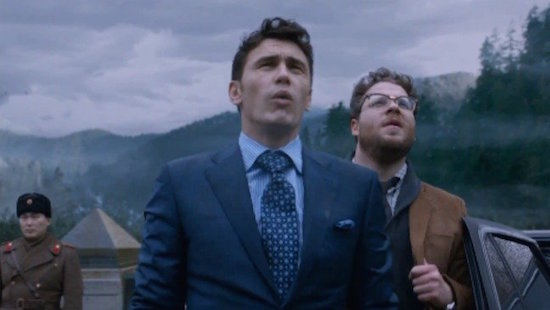 The truth of the matter is that while Apple certainly would have liked to have had The Interview available on iTunes upon its release, the company simply didn’t have the resources to make that happen on Christmas Eve. It is no secret that the iTunes Store goes on lockdown for the holidays, with Apple giving most of its employees time off to be with friends and family. The lockdown is in fact an annual event, with app developers and content providers given a two week notice alerting them that there will be a freeze on updates and store additions during the holidays. Apple was simply following its standard protocol for iTunes during this time of year, and as a result, it truly couldn’t get The Interview in place “on a speedy time table.”

As we all know by now, the film appeared on iTunes at the start of the week, just as the holiday lockdown was being lifted. This of course was met with some derision online too, as I personally saw comments posted on other websites that indicated that Apple only relented do to the high demand by consumers who wanted to watch The Interview. Other comments implied that Apple saw that there was money to be made by hosting the film, and that they had waited until the threats of retribution by the hackers proved to be false to safely cash in.

While it is true that the comedy has proven to be a very successful video-on-demand release, that actually played zero part in Apple’s decision to add the movie to iTunes. On Monday, Apple staffers returned to work following the holiday break, and they uploaded The Interview to the iTunes servers just as they would with any other digital content waiting to be released. There was no nefarious plot on the part of Apple to prevent the film from being shown, nor were they overly concerned with what the hackers would do in retaliation. It was simply business as usual at Apple, and the company was treating Sony as it would any of its other iTunes content providers. 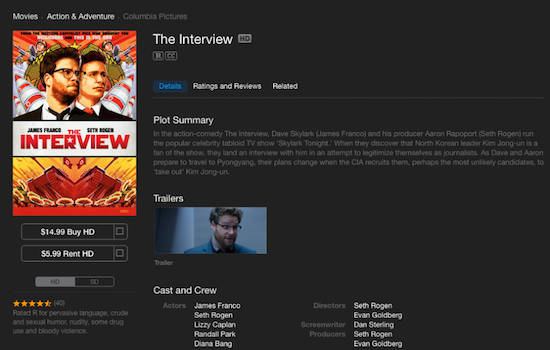 As the most valuable company in the world, and the highest profile tech company on the planet, taking shots at Apple is an easy way to garner web traffic. Sometimes Apple deserves some of the shots leveled at it, and other times it is simply being singled out due to its stature in the industry. This is happens to be one of those times when the criticism was unwarranted, and it generally came from people who don’t understand the way that Apple operates. Had Sony gotten The Interview to Apple prior to the holiday lockdown, I have no doubt that it would have debuted on iTunes just as it did on the other digital streaming services.

This wasn’t a case of Apple being afraid of hackers or not wanting to support free speech. It was simply bad timing.

You Can Now Watch “The Interview” via iTunes Store

The Best Freebies on the iTunes Store