You are here: Home / Opinion / Is Apple’s New Music Streaming Really Up To the Challenge? 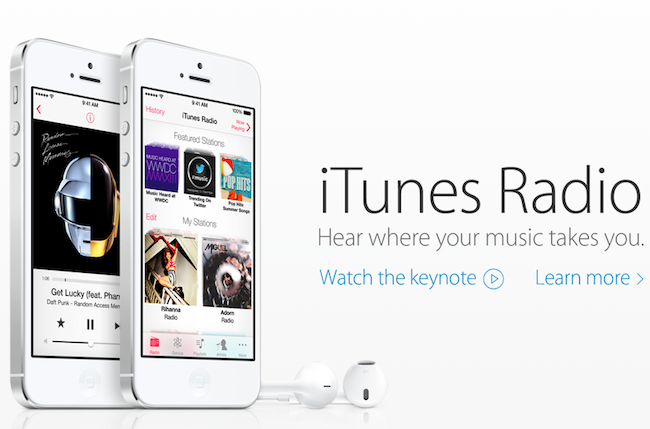 After what has seemed like a long wait, Apple has finally announced more details about its brand new music streaming service, which will be known as iTunes Radio. It is due to launch in the second half of 2013, and it was announced at the Worldwide Developers Conference in San Francisco in June this year, alongside an updated version of the Apple operating system. Apple’s operating system has come under fire from industry experts as lacking any significant updates in recent years, and it was seen as being outdated compared to its rivals, most notably Android and Windows, which allow users to multitask apps. Thankfully, the new Apple operating system now supports multitasking apps as well as coming with a fresh new look and typeface.

The launch has been delayed from last fall due to the length of time it has taken to sign up all of the major music producing companies. Sony Music was the last company to sign up to the service in early June, and now Apple are in a position to launch their music streaming service to the general public.

Apple’s iTunes Radio is going to be offered as a free service. However, listeners will have to listen to sporadic advertisements from time to time. For those customers who do not wish to listen to advertisements, they have the option to subscribe to iTunes Match, which will not only be ad-free, but it will also store all of your music in iCloud, and that includes songs you have imported from CDs and purchased elsewhere – all for the low cost of $25 per year.

One of the biggest selling points of the new Apple iTunes Radio has been the use of iCloud, as this will allow you to store all of your music and listen to it on different Apple devices, such as an iPhone, Mac or Apple TV. Plus, it will tailor its music stations to the kind of music you play and download, so the more you use it, the more personalized your listening experience will be. And your listening experience doesn’t stop there, as you will also have the opportunity to customize radio stations to suit your music tastes.

Apple’s Siri can also be used to control your music and you can ask Siri to identify the song and artist that you are currently listening to. If you are listening to a particular genre, and you would like to listen to more of the same you can even instruct Siri to “play more songs like this.”

One advantage that Apple iTunes Radio has over the likes of Spotify and other music streaming sites is that because they are the most popular music store, they are likely to have the latest music releases as soon as they come available, and before everyone else.

There is no doubt that there is fierce competition amongst online music streaming sites, as only a couple of months ago, internet search giant Google threw its hat into the ring of internet music services. Add to that, the music streaming sites such as Spotify, Rhapsody, Pandora Internet Radio and others, the music listening public has never had so much choice when it comes to internet radio sites.

Apple iTunes Radio is primarily designed to target those people who already own Apple devices and its use of iCloud to play tunes across a number of different devices is sure to be popular among Apple aficionados, however, the jury is still out on whether it will be enough to convince existing customers of other music streaming sites to swap.

Andy Heaps  has over 15 years of experience working in the telecoms industry. At present he is employed by thecomparison.co.uk as an editor and chief technical advisor.