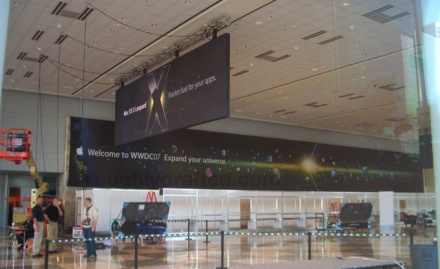 Well, Engadget has some pics up showcasing this year’s WWDC banners. So far, they don’t reveal a great deal to us, in fact, the only thing that is even of note, is that Apple appears to be going for some sort of “universal” theme this year.One banner reads “Welcome to WWDC 2007 – Expand Your Universe”, while the other one appears to say “Mac OSX Leopard – Rocket fuel for your Apps.”As WWDC anticipation reaches a fever pitch, I can’t help but be a little excited just by seeing the banners – even if they don’t tell us much about what to expect next week.