You are here: Home / Apps / Who Sends Out the Best News Notifications? 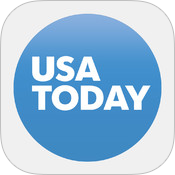 When news happens, your iPhone and iPad news apps can be counted on to send out notifications so you know immediately what’s going on. But some news apps are faster and more thorough than others.

This is an imprecise science, and as with all things online, it’s bound by the strictures of server speeds and bandwidth issues and all that. So there’s no universal rules when it comes to this sort of thing; results vary every time, and will vary depending on your device, your physical location in the world, and so on.

So, all that to say: these are my observations, and shouldn’t be taken as 100% definitive.

Very often USA Today is first out of the gate. I don’t know how they do it, but in my experience, they beat everyone else to the punch about 80% of the time. They must have a whole team standing by 24/7 to send out those notifications as soon as news happens, because they usually beat everybody else to the punch — and sometimes by quite a lot. USA Today‘s notifications are the least detailed of any of the news agencies, which I suppose is the price of being first.

On a different note, USA Today tends to be a little “looser” with its definition of what qualifies as “breaking news.” By that, I mean that they include news that some users might consider less important, like sports scores, entertainment awards, and occasionally even celebrity relationship stuff. They also have very little focus on global matters, but hey — that’s pretty much implied by their name.

This website (which is owned by MSNBC) is a sort of social news aggregator; it’s often the best place to find up-to-the-second news. But their app’s news notifications are a little shakier. Now and then they’re the first ones to send notifications, other times they come in second or third. It’s a mystery to me why their near-instantaneous news updates online and on Twitter don’t always translate into faster notifications.

Their news is well-rounded, though, with a focus on both local and global news. And their coverage is kept to major happenings. Nothing frivolous.

NBC is typically closer to the top of the list than the bottom, sometimes even topping the list. Their amount of detail is greater than USA Today’s, but not as detailed as CNN’s.

Not a strong showing with the notifications at all. Not only are they not very timely, their frequency is minimal. They don’t send out nearly as many notifications as the rest, and the majority of what they do send is focused on politics.

A lot like ABC, but with even less notifications. Over the last week, I’ve gotten one news notification from CBS. One. The week before that, I didn’t get any. Notifications seem to be an afterthought on CBS’ part.

To the surprise of no one at all, Fox’s news notifications are usually near the bottom of the heap. They’re less frequent than USA Today’s, Breaking News’, and NBC’s, but at least they’re more frequent than ABC’s — and their coverage is more thorough than ABC’s, too.

Despite their reputation in journalism, I frequently find myself frustrated with CNN’s notifications, because they almost always come in dead last. I can’t figure out why that is. Sometimes they’re a few minutes later than the others, other times it’s a good half an hour or even longer before they send out a notification. You’d think they’d be among the very first, wouldn’t you? On the other hand, their notifications are probably the most detailed of all.

It’s unfair to compare BBC News to the others on this list, because they’re in a different class altogether. By definition, their coverage is focused on global affairs, and comes from a point-of-view that’s different from local U.S. news organizations. Their notifications are timely, thorough, and focus on events of worldwide significance. A good companion app for your news app of choice — assuming BBC isn’t that very thing.