by Alex Thomas 6 years ago3 months ago
1

Virtual Reality games are represent the future of gaming and Apple is realizing pretty quickly that the VR train is a train that they need to hop on. While some of the headsets for the iPhone that make it a VR platform are awkward and bulky, others are pretty easy to use and are actually a lot of fun. The Virtual Reality games for iOS have a long way to go but it feels (to me) like what we’re seeing here is the start of something. Almost the Pong of the future of gaming. And I kind of like it. Here are a few VR games for iOS that you should be checking out.

I feel like every time I hear about VR there’s always the conversation that “this is going to completely change the medical field”. And InCell VR might be a step in that direction. This isn’t a super medically realistic game but it might be enough to push somebody in that direction. Your goal in the game is to kill off viruses and save the host from death. You can play the game with or without a VR headset and it’s designed for a cardboard headset so you won’t have to shell out a lot of money to play it.

If you’re a roller coaster junkie but you’ve never been able to find that perfect ride then Roller Coaster VR might be right for you. It’s a great way to dive in to the world of VR gaming with rides that are precariously strapped to the side of mountains and seem to go nowhere. There are jumps and underwater sequences and everything you’ve always wanted from a ride but never have been able to get, because honestly, these kinds of roller coasters aren’t exactly legal.

End Space VR is one of the more popular VR games and that’s probably in no small part due to the fact that the graphics are incredibly realistic. The 360 view allows you to explore all directions, something that we’re expecting to see from all VR games pretty soon. This is the kind of game that you’re going to want to fork over a bit of money for a decent headset and it’ll be totally worth it. 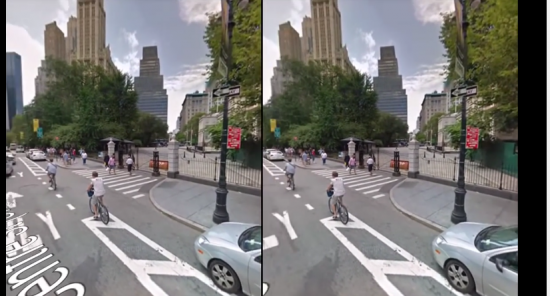 If you’re like me then you’ve always wanted to explore Paris and Tel Aviv but you always seem to be too poor to afford a ticket even on Spirit Airlines. Google street view is a “game” that’s comprised of 360-degree photographs of the most famous places in the most famous cities in the world. It’s not really a game in the sense of the other things on this list but it’s still worth the download and since it’s from Google, you can be sure it’s going to be extremely well done. So next time you’re bemoaning the fact that you’ll never see the Eiffel Tower at night, just head over to the app store and get this on your phone. It’s also an app that I’d say is worth a fancy headset.

Romans From Mars is a tower defense game like none that you’ve played before. You’ve got a crossbow and your goal is to kill off the Martians (that are dressed as Roman soldiers) before they get to your tower. It seems silly, but then again so did Angry Birds, and this one is just as addicting.

Virtual Reality Games for iOS certainly have a long way to go, there are going to be a lot of advancements both in terms of the games and in terms of the headsets. The games that we’ve included are important because they’re the best games that have gotten in on the ground floor. I’m not saying that Roller Coaster VR is going to become the Super Mario of VR games but this arena is not so lucrative as it is promising. There’s definitely a future in VR Games for iOS and I suggest jumping on these ones before there are too many to count.