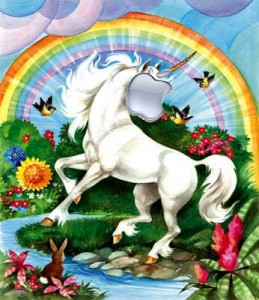 Last night, my wife was feeling a little bit concerned about the health of our impending child, so we headed off to the hospital to run some tests. We go into a triage room, get hooked up to a monitor, and sit there for 30 minutes. Turns out there’s nothing wrong and it’s all good.

While I was there, I noticed the Dell sitting on the counter with the matching Dell display, blipping our baby’s heart rate along the screen. For 30 minutes we were alone, and then the door opens.

“Hey there, you’re all good, baby looks great,” says the nurse. She hadn’t even looked at the monitor yet, so I wasn’t sure how she knew how my wife was doing, and then I remembered something that our OBGYN told us.

“We have access to all of the hospital’s servers, so we can monitor you from home, that way I can just walk in when I see the baby is coming soon.”

Which brings me to this whole Unicorn Tablet deal.

I’ve been trying to ignore this post all week from Jason Wilk at Tiny Comb about the Unicorn Tablet being pitched to doctors at a hospital in LA. First, there’s how he discovered this information:

[What’s my intel? My Dad plays golf with Cedas-Sanai hospital execs, who say they have been getting frequent visits from Apple about a new device in the last 6 weeks].

Ah, the classic “my brother’s cousin’s dog sitter knows” explanation. I’m not doubting the veracity of his father’s statement, but it does lean towards the realm of improbability. Here’s why.

First, I have absolutely zero doubt that Apple wants doctors to use the Unicorn Tablet. After all, doctors already use tablets for work, they just have PC versions because up until Apple releases one, that’s their only option. The problem though is breaking through the Windows wall in the healthcare industry. They have servers, medical files, spreadsheets and everything else all done in what’s most likely a proprietary system, which makes putting an Apple product in the mix that much more difficult.

Then there’s the NDA issue. Apple is famous for non-disclosure agreements, and I’d think that if Apple sent off people to Cedars-Sinai all month, then they’d have certainly signed NDAs to protect the info. Sure, people might be tipsy on the golf course and maybe a little bit slipped out, but what’s the chance it slips out to the guy who’s kid writes for a tech news blog? And even if it does, what’s the chance that these execs are the people who are talking to Apple about how to make it work? I’d think that Apple would talk to the doctors themselves, since they’re the ones who would use this device on a daily basis.

There’s one other thing that nags at me about this concept. When talking about Blu-Ray on the Mac, Steve Jobs called it a “bag of hurt.” If Blu-Ray is a pain in the ass, then the healthcare system is better?

Ultimately, as I’ve said before, this is all conjecture for the next 13 days until we all tune in for the rumored Apple event on January 27th and Steve walks out with the mythical Unicorn Tablet. Until that happens, I’m taking it all with a grain of sale.