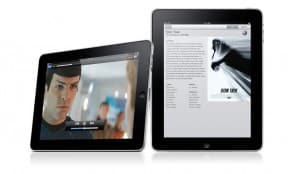 As some of you know, I have a baby on the way. In fact, the wife was due yesterday, but that didn’t happen. What you probably don’t know is that I’m also an intense car guy who is buying a crew cab truck in the next few months, and outfitting it with enough technology to run my business on the road. In that plan, I imagined having a baby seat in the back with monitors in the headrest, so that Kevin Jr (no really, that’s his name) can watch Barney while we drive across the country.

Of course, that was the plan before January 27th, because now I think that I’ll just get an iPad for KJ and call it good.

With the iPad, he can watch his favorite shows, play games or even learn how to write, all from the comfort of the backseat. Sure, it’s a fragile thing, but in a year or two, the first gen iPad would be perfect for a developing child. Plus it’s portable, so he can take his fun with him wherever he goes.

This idea was cemented a little bit more after meeting with a buddy of mine this past weekend. He’s got two kids of his own, and up until recently, had a GMC Denali with a similar setup to what I was envisioning. Turns out the truck was stolen twice in one year, and each time they stripped it down, taking out the headrest monitors and stereo. Now imagine if he had an iPad for each child, or even just one mounted in the middle. When he parked his truck, he could just take the iPad with him, and maybe the thieves would want to go to the next truck.

Is it an expensive toy for a kid? Sure, but by the time I get one for the kid, he’ll have a first-gen model, while I’m working on a third-gen, and I’m sure he’ll be fine with an OG iPad. It’s recycling at it’s finest.

It may be a bit pricey, but I think we’re going to be seeing more of this in the future.