Three New Get A Mac Ads 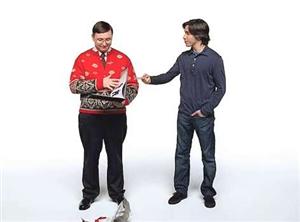 Just when we thought there would be radical changes to Apple’s Get A Mac ads with the rumor of Justin Long’s not appearing as “Mac” anymore (which has since been cleared up), Apple has released three new videos featuring the familiar John Hodgman and Justin Long team-up.

One of the videos is holiday-themed, but I think all of the ads are very apt for this holiday shopping season. How else to better help shoppers make good buying decisions (for themselves and to give as gifts) than to get a Mac?

In Sales Pitch, PC, instead of the usual intro line “… and I’m a PC,” says “and buy a PC.” PC then explains that he needs to increase his marketing efforts, since Macs are selling like hotcakes lately. “The PC–the only computer you’ll ever need!” Hilarious!

Meant for work is aimed at kids (or parents with kids), highlighting that PCs are meant for work stuff, and not much for the fun stuff that kids usually do like write blogs, organize photos, and such. Of course, we know Macs make doing fun stuff even more enjoyable!