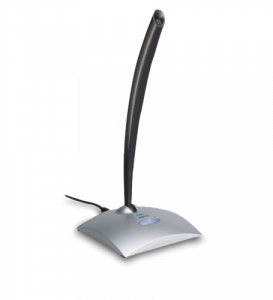 A few weeks ago, I was asked to do an interview for a podcast (iTunes link), which we were going to do over Skype. This was my first interview, and i didn’t want to come off sounding like a muppet on crystal meth, so I decided to head out to my local Fry’s Electronics and pick up a USB microphone. I originally figured that a combination headphone/boom mic would be the way to go, but the prices scared me off a bit. At a little under $30, the Logitech USB Desktop Microphone seemed like the best combination between affordability and function, so I plunked down some cash and picked it up.

Installation was easy enough, I just plugged in the USB cable and figured it was good to go. After playing around with it for a bit though, I realized that now I had a secondary mic source, so if I wanted to use it, I had to select it in each program. Skype, for example, required me to change the settings before the mic would work properly.

How did it work? Well the interview went fine, and the sound quality isn’t too bad considering it was recorded in a room with wooden floors and a non-acoustic ceiling. I wouldn’t say that it’s perfect though. The button on the bottom of the mic is designed to turn it on or off, which works just fine. But if you’re in the middle of a conversation and have to cough or walk away, the person on the other end will hear a loud clicking sound. I figured that out prior to the interview, but keep that in mind.

Now that the interview is done, I’m not really sure what to do with the microphone, either. For now, it just sits between my monitors, unused but plugged in for the next occasion that I need it. Fortunately, the microphone itself does pivot at the base, so it folds up to a small size.