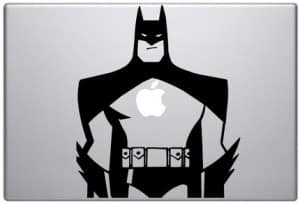 My hobbies were very defined as a child. I was into Transformers and G.I. Joes for a bit, then it went to Legos. I sold my Legos to get into comic books, then sold those to buy my first set of custom wheels for my car. Since then it’s been cars for the most part, and I don’t see that changing anytime soon.

My love for comics is still there, though, and I catch myself watching Justice League and Batman on a regular basis, and every so often I swing by the comic book store to see what’s new. That’s why when I saw this sticker on Etsy, I seriously considered plunking down some cash.

Movie Magic Man has a store on Etsy, and there he’s got all sorts of cool comic book and related stickers for your MacBook that work in the Apple logo. There’s the Batman pictured above, as well as Iron Man, Lego Darth Vader, and even a cool Snow White holding the glowing logo. It’s always nice to make your Mac stand out just that much more. Let your dork flag fly.