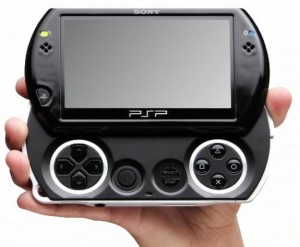 It took me a while to finally buy one, but about a year after the original PSP came out, I bought one. I had a lot of fun with that thing, although a few dead pixels pissed me off here and there, and it was perfect for road trips and long flights. Problem was, it was perfect for road trips and long flights – not much else. Since I don’t travel all that often, it Â seemed funny to me to have to lug the PSP, games, cases, charger and related accessories with me every time I wanted to hop on a plane. At 34, it gets kind of difficult explaining to the TSA security screener why you have the same console that the 7 year old in the next aisle has.

But besides the embarrassment factor, there are other things in play as well. The proprietary game format, for example. The discs were just clunky to carry, and expensive to purchase. $40 for a new game? No thank you, I’ll just buy the full size version for $60 and get more content. Then there was the Memory Stick, which you had to buy just to save your games. Then, when the PSP Go was released, I was told that there was no more physical game to purchase, you just buy everything online. Time to throw out that old collection. Sorry, I just wasn’t interested.

Not unless they did something different. Three years ago, I was just one of many people talking about the possibility of a PSP phone. In all their infinite wisdom, Sony figured that they had made enough money with the PS3, so they didn’t need some hokey gadget phone.

The Christian Science Monitor is reporting (albeit via the Wall Street Journal) that Sony is looking to take on the iPhone. Had this been three years ago, I’d care. But at this point, Sony’s lost so much ground to Apple, Microsoft and Nintendo, that I don’t know how they’re going to get a foothold in the market. Between proprietary hardware and software, hardware that turns off on specific dates, and abandoning those proprietary systems mid-stream, I just don’t have the trust in the company anymore. No reason for me to buy a PSP phone, and I bet a lot of people feel the same.