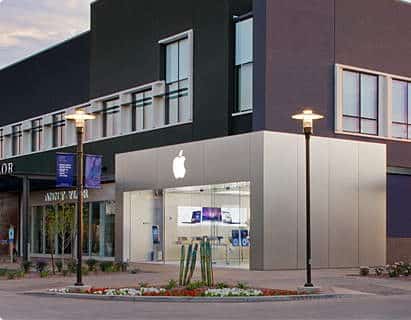 See that pretty looking store right there? Two years ago, I spent about 6 hours in line at that location, waiting for my brand new iPhone 3G. It’s one of the bigger Apple stores in the area, and it’s in a new mall on the outskirts of town. It’s a bit far out for me, but for the tons of people out in Queen Creek and the surrounding area, it’s the closest Apple store that you can find.

It also has a giant glass storefront like many Apple stores, and a few enterprising thieves decided that was an invitation to make a bit of extra cash. AZ Central has the basics:

Gilbert police are looking for two unidentified young men who stole $9,400 worth of merchandise from theÂ AppleÂ Store in San Tan Village mall in 34 seconds in an early morning break-in Tuesday.

Police said the burglars used two large rocks to smash a large plate-glass door, then stole the merchandise and caused an estimated $30,000 in damage.

The pair were caught on tape by a distantÂ video camera, police said.

An iPhone 4, two iPads, 2 MacBooks and anÂ iPodÂ Touch were among the items stolen, police said.

Now here’s the thing: These devices all have serial numbers and all of them connect to the internet. I’m sure theÂ thievesÂ are going to try to offload these things on Craigslist or eBay, but at some point, someone is going to try to get those things online and when they do, they’re screwed.

Maybe it’s a good idea to beef up security at locations like this, huh?