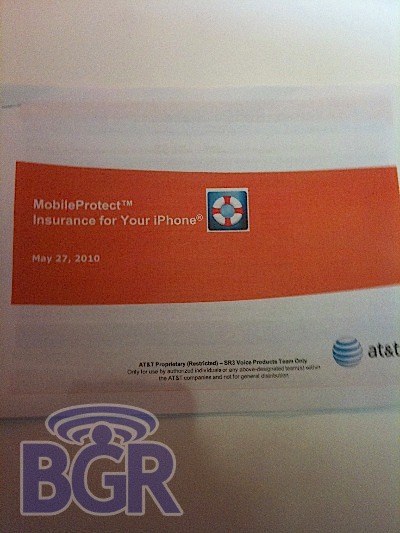 If there’s one guy out there who really knows his stuff, it’s the man behind Boy Genius Report. If he says something is going to happen, 9 times out of 10 I not only believe him, but I’d place money on it.

So what’s his latest bit of gossip?

One of our AT&T ninjas just hit us up with some news that will excite those of you who have a chronic case of the dropsies and own an iPhone. AT&T will be launching a new insurance service starting June 6th, named MobileProtect, designed specifically for the Apple iPhone. The insurance plan, which will be run by Asurion, will carry a price tag of $13.99/month and will be available for purchase through Appleâ€™s App Store. The charges will be billed to the credit card on file with Apple. The deductibles range from $99 for an 8GB 3G to $199 for a 32GB 3GS, which is pretty steep â€” but not quite as steep as $699 for a new 32 GB 3GS off-contract. You must enroll in the plan within 30-days of upgrading/purchasing a new iPhone. AT&T is launching this service as: â€œLack of iPhone insurance is a leading source of iPhone related customer complaints.â€

I was surprised when I first bought my iPhone that insurance wasn’t an option. It’s one of those things that most people pay for and never use, and others completely abuse. In the case of the iPhone – a particularly fragile device with a glass screen – it seems like a gimme. And now maybe it is.

A few months back, my dad dropped his iPhone in a pail of water (he keeps it in his shirt pocket, no idea why) and had to buy a new one. I knew there was going to be the new release in a few weeks, but before I could tell him, he plunked down $699 for a new phone. He didn’t even upgrade to a 3GS, which I chastised him for later. This would have saved him $500, but at the same time, cost him $168 per year. Had he dropped his phone the month before his contract was up, he would’ve saved $165. On the flip side, had nothing ever happened, he would’ve paid $336 for piece of mind. Is that worth it to you? For my dad, maybe. For me, I’m not so sure.