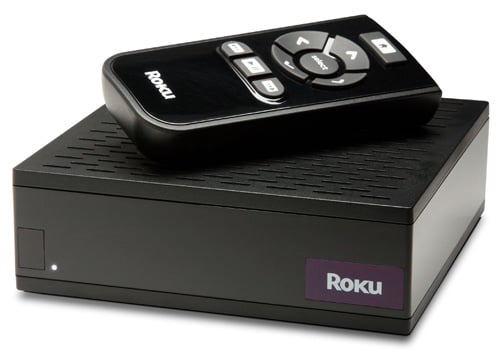 Roku today has released an AppleTV rival device in their Netflix Player. This small box that is only slightly smaller than a Mac Mini can play any of the over 10,000 titles in the Netflix “watch instanly” library.

Almost any of the Netflix subscription plans allow for unlimited use of the “watch instantly” feature, while still receiving DVDs or HD titles in the mail.

The box is inexpensive, priced at only $100, and for existing Netflix users, will not increase their monthly expenses. Currently the content is only available in Standard Definition, but HD is on the way, and when it arrives the Roku box will be ready for it. You can connect the Netflix Player through HDMI, component, S-video, or RCA to a given TV; audio is supported through both RCA and optical out.

Luckily, Netflix is not committed to just Roku for this kind of product, and is already incorporating “watch instantly” compatibility into an upcoming LG Blu-Ray player, and 3 other devices. My sincere hope is that this service finds its way to the AppleTV.

A Netflix/Apple partnership on this would be a huge asset to the AppleTV. As it stands right now, the Roku makes a compelling rival to Apple’s digital download box, and it will be interesting to see how the two square off against on another in the future.