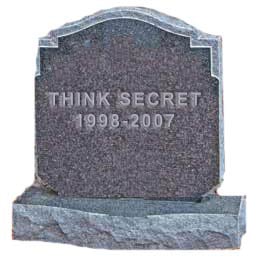 Think Secret was, at one time, THE Apple Rumors site. If you’re new to the online world, of if you’ve only been reading the Apple sites for a few years, its possible that you never really checked out Think Secret. Over the last few years the site has diminished because of a lawsuit filed against it by Apple.

In December of 2004, Think Secret published details about a new Mac and some word processing software. At the 2005 Macworld , we were introduced to the Mac Mini and iWork. According to Wikipedia.

Apple filed a suit against Think Secret claiming that they violated trade secrets. (I have also read the lawsuit was filed over a piece of software called “Asteroid” that has never actually been released.)

Finally on December 20th, 2007, that suit has been privately settled, in a manner that the creator of Think Secret, Nick Ciarelli, described as “amicable”.

As a result of the settlement, Think Secret will no longer be published. It was a good run, and even though the site is shutting down, blogs like this exist and are safe(r) from legal action, because of the steps that Nick Ciarelli went through in fighting the Apple lawsuit.

So my hat goes off to Mr. Ciarelli, and I hope that he is successful in whatever he chooses to do in the future.