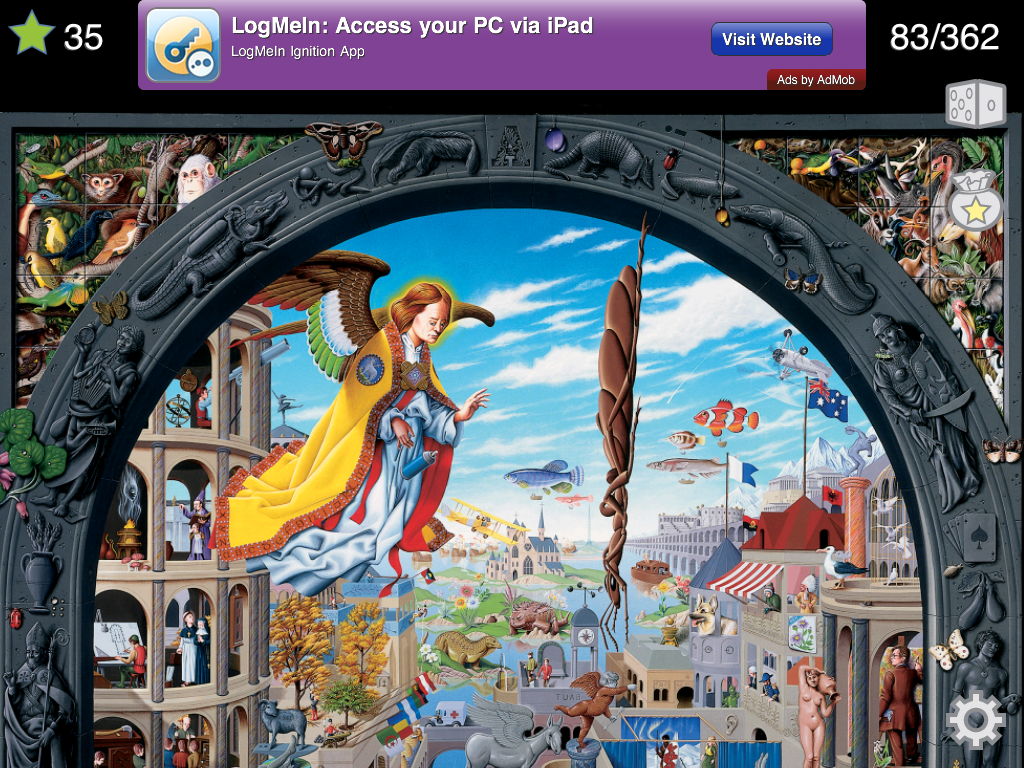 Ultimate Alphabet is one of the best unknown gems for the iPad. The name sounds like a set of flashcards for your toddler, but the game is anything but. It’s more like an interactive Renaissance painting.

The screenshot you see above represents the main game board, where there are 362 objects that start with the letter A. That’s right: three hundred and sixty-two.

When you first download the game app, you’ll get this letter A trial, where you can find a limited number of the available A-words. If you want more, an in-game purchasing system lets you buy the full solutions for the letter A (and ditch the banner ads), as well as additional game boards for the letters B, C, and D (which is as far as the game goes thus far). Individual letters can be bought for $3 each, two letter bundles for $4, and all four available letters can be yours for $7. 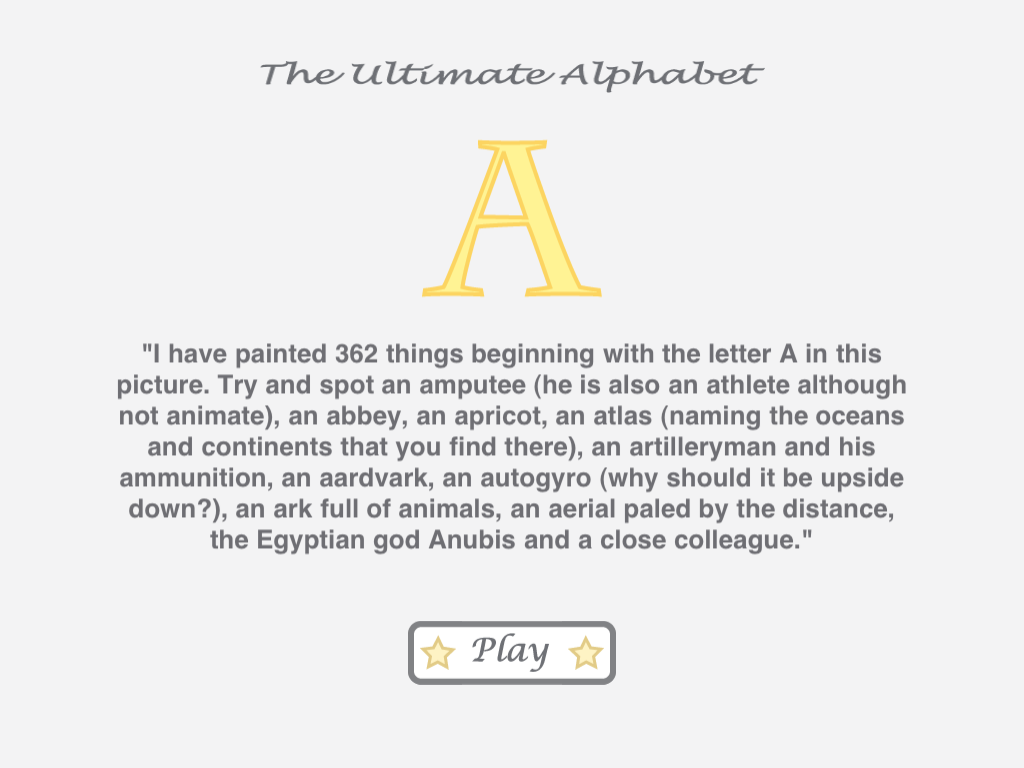 A beautifully simple interface presents you with the painting, with which you can use the standard pinch-to-zoom gestures. See something that starts with the letter A? Double-tap it, and the screen zooms all the way in on the object and highlights it with a flashing outline. The keypad pops up and you can type in the word you’ve found. It’s that simple.

If it sounds easy, it’s really not. For every “ant” and “angel,” there are incredibly obscure words like “alto-relievo.” For each object in the painting, there could be a dozen or more words available. The game will tell you how many you have to go, and it will even give you hints for the ones you’re missing. If the hint doesn’t help, you can even engage in a missing-letter puzzle that’s part jigsaw puzzle and part crossword. 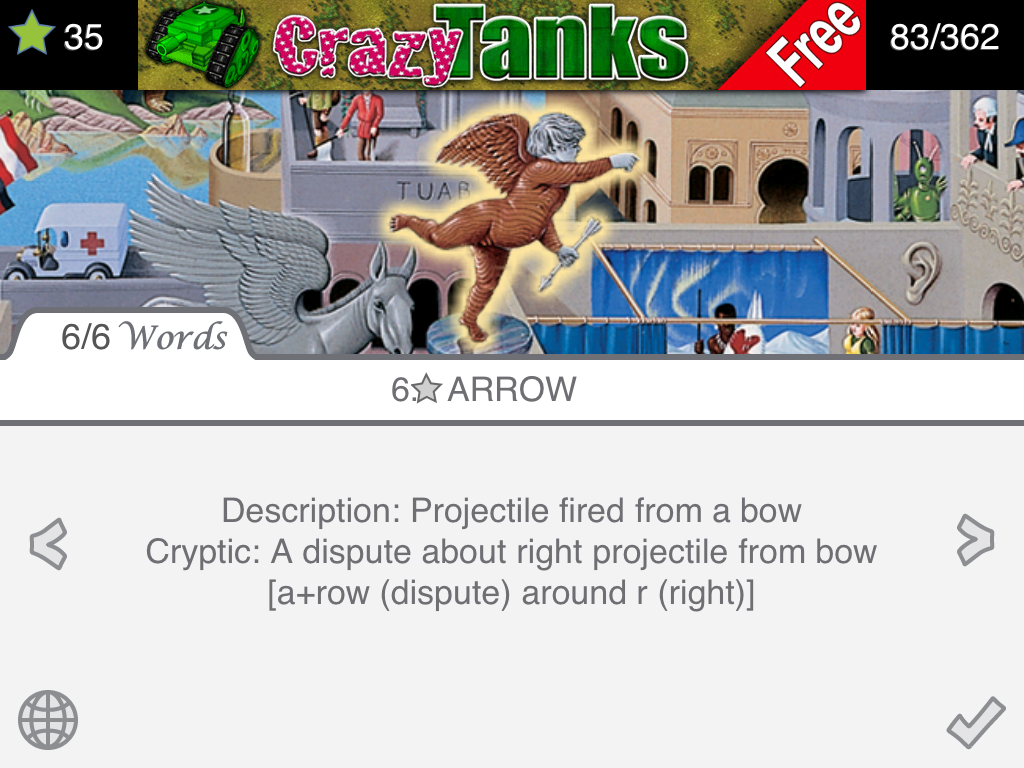 Coins are awarded after deciphering enough objects/words of certain topics, such as anatomy, botany, food, music, and many more. The game keeps a running total of how many words you’ve found in the top right corner.

On the downside, I’ve encountered more than one bug in the game, all of which are related to an inability of the game to keep up with finger gestures. Sometimes control buttons don’t work, other times the game just freezes until you have to restart it. If not for these bugs, Ultimate Alphabet would be a 5-star game. Hopefully this stuff will be fixed in a forthcoming software update. 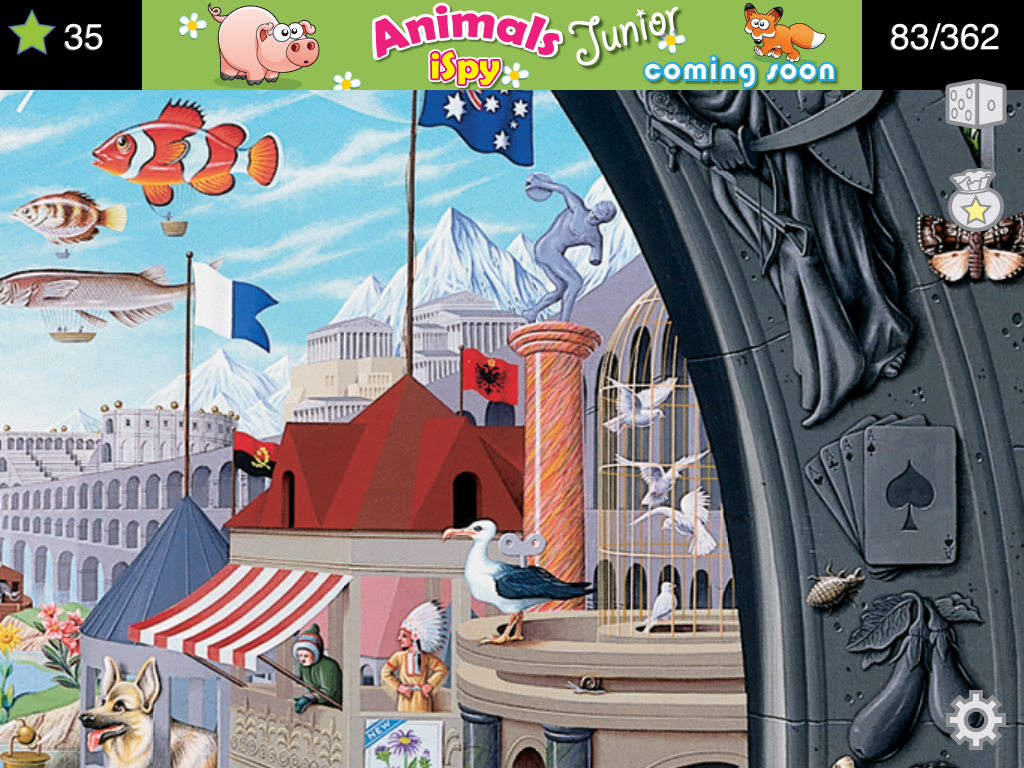 Ultimate Alphabet is one of the few times in my life I’ve started up a game for the first time and been unable to stop playing until I finished it. Surprisingly addictive and beautifully executed (assuming those annoying kinks get worked out), this is one thoroughly original iPad title that makes smart use of what the device can do.