Review: The Crystals of Atlantis 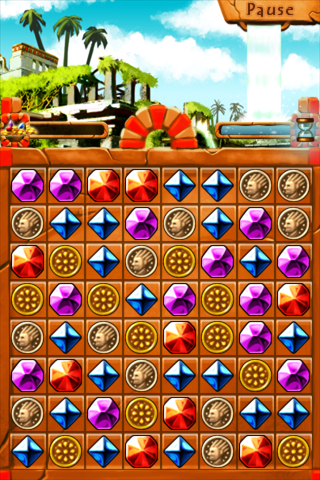 It would be easy to write off The Crystals of Atlantis as “another Bejeweled clone for iPhone,” but it actually reminds me of another crystal-matching game I got from Xbox Live Arcade, called Treasure Quest.

You’re still out to match three crystals of the same color in a row — horizontally or vertically — but that’s where the similarities end. The board changes configurations with every new level, taking entire spaces out, adding in “frozen” crystals that have to be unlocked, and more. Every level offers a new challenge, so you can never use the same strategies twice. 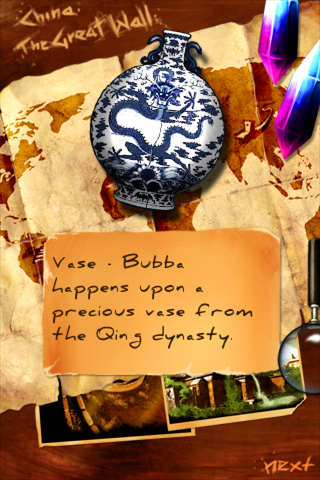 You play as an archaeologist whose goal is to unearth artifacts, according to the way-too-long introductory narrative. So in each level, you’ll find fragments of a different artifact that have to be “dug up” and pieced together. To acquire them, you have to clear the spaces below them, so that they ultimately fall to the bottom of the game board.

The game is told in parts, and will take you to various historical sites around the world to unearth more treasures. When you complete a section, you’ll be given a piece to a map. Once the map is complete, it points the way to Atlantis, which becomes the final part of the game. 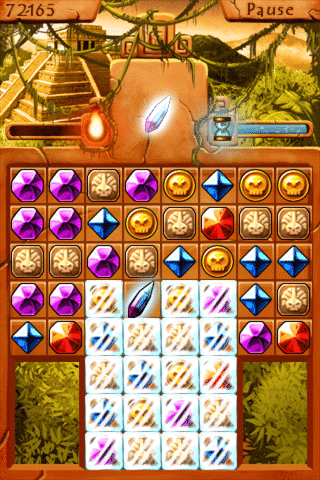 The game board resets itself automatically when it there are no moves available, which indicates that the algorithms behind the game aren’t sophisticated enough to keep you from running out of moves. The crystals are randomly assigned, with no mathematics behind them, but fortunately, there are only a few variations in colors, so it’s never hard to find matches.

If you manage to match four or five crystals in a row, your power-up meter will get some juice. Once the meter is maxed out, you can use it to destroy a single crystal anywhere on the board. This becomes vital to success in later levels, when it’s just impossible to clear a level in the time given by basic crystal-matching. 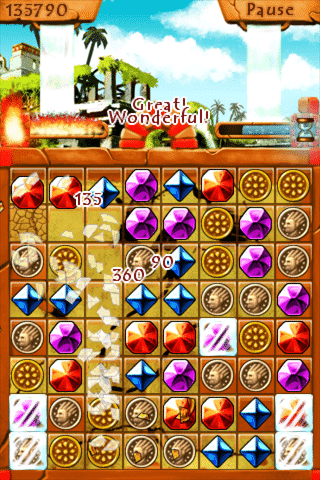 Aside from the normal “Story” mode, there’s also a “Free Play,” which lets you play a single level from any part of the game. But it turns the game on its head, so that instead of trying to acquire artifact fragments, you’re simply trying to clear enough jewels to fill the meter before time runs out.

Puzzler fans will find themselves addicted to the fast-paced gameplay. Others will find it an enjoyable novelty that’s easily forgotten. Neither will have the patience to sit through the tedious storyline bits that precede every level (fortunately, you can skip them). Either way, it’s hard to argue with the $.99 price. 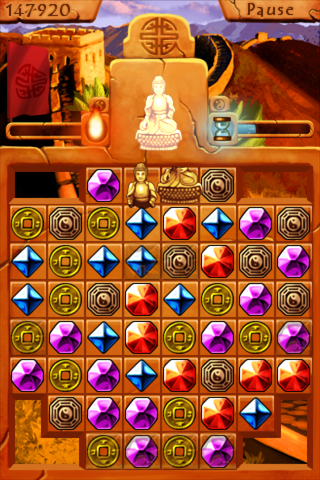