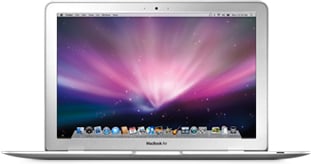 So here is a quick recap of things from the Keynote:

Apple today introduced Time Capsule, a backup appliance that automatically and wirelessly
backs up everything on one or more Macs running Leopard(TM), the latest
release of Apple’s Mac OS(R) X operating system including the amazing Time
Machine(TM) automatic backup software. Time Capsule combines an 802.11n base
station with a server grade hard disk in one small package. Simply plug it in,
then easily set up automatic wireless backup for every Mac(R) in your house to
a single Time Capsule with just a few clicks. Time Capsule offers the benefits
of a full-featured 802.11n Wi-Fi base station, and comes in two models: a 500
gigabyte model for just $299 and a 1 terabyte model for just $499.

Apple today announced a free software update for its revolutionary iPhone that allows
users to automatically find their location using the redesigned Maps
application*; text message multiple people in one message; create Web Clips
for their favorite websites; customize their home screen; and watch movies
rented from the new iTunes(R) Movie Rentals right on their iPhone. With its
revolutionary multi-touch user interface and pioneering software, users can
easily add significant new features to their iPhone through software updates
whenever an update becomes available. New iPhone products shipping from the
factory will include the software update and existing iPhone customers will
automatically get the update for free when they sync their iPhone with iTunes.

Apple today announced iTunes(R) Movie Rentals featuring movies from all the major movie
studios including 20th Century Fox, The Walt Disney Studios, Warner Bros.,
Paramount, Universal Studios Home Entertainment, Sony Pictures Entertainment,
Metro-Goldwyn-Mayer (MGM), Lionsgate and New Line Cinema. Users can rent
movies for as low as $2.99 and watch them on their Macs or PCs, all current
generation iPods*, iPhone(TM) and Apple TV(R). iTunes Movie Rentals launches
today and will offer over 1,000 titles by the end of February, including over
100 titles in stunning high definition video with 5.1 Dolby Digital surround
sound which users can rent directly from their widescreen TV using Apple TV.
iTunes Movie Rentals are priced at $2.99 for library titles and $3.99 for new
releases, and high definition versions are just one dollar more with library
titles at $3.99 and new releases at $4.99.

Apple(R) today unveiled all new software for Apple TV that allows movie fans to rent
movies on the iTunes(R) Store directly from their widescreen TV, and lowered
the price of Apple TV to just $229. With iTunes Movie Rentals and Apple TV,
users can just click a button on their remote to effortlessly rent movies from
a catalog of over 1,000 titles by the end of February, including over
100 titles in stunning high definition video with 5.1 Dolby Digital surround
sound, with no computer required. DVD-quality iTunes Movie Rentals are $2.99
for library titles and $3.99 for new releases, and high definition versions
are just one dollar more with library titles at $3.99 and new releases at
$4.99. Apple will provide the new Apple TV software free of charge to existing
Apple TV owners when it releases the new Apple TV priced at $229 in about two
weeks.

Twentieth
Century Fox and Apple(R) today announced Digital Copy for iTunes(R), which
provides customers who purchase a DVD with an additional Digital Copy of the
movie. Just like movies purchased from the iTunes Store, an iTunes Digital
Copy can effortlessly be transferred to iTunes and then viewed on a PC or
Mac(R), iPod(R) with video, iPhone(TM) or on Apple TV(R). The first DVD to
make its debut with iTunes Digital Copy is the Special Edition DVD premiere of
the Family Guy “Star Wars” parody, “Family Guy Presents: Blue Harvest,” which
is being released in stores today. Fox and Apple are planning to deliver many
more DVDs with iTunes Digital Copy this year.

Apple(R) today
unveiled MacBook(R) Air, the world’s thinnest notebook. MacBook Air measures
an unprecedented 0.16-inches at its thinnest point, while its maximum height
of 0.76-inches is less than the thinnest point on competing notebooks. MacBook
Air has a stunning 13.3-inch LED-backlit widescreen display, a full-size and
backlit keyboard, a built-in iSight(R) video camera for video conferencing,
and a spacious trackpad with multi-touch gesture support so users can pinch,
rotate and swipe. MacBook Air is powered by a 1.6 GHz or 1.8 GHz Intel Core 2
Duo processor with 4MB L2 cache, and includes as standard features 2GB of
memory, an 80GB 1.8-inch hard drive, and the latest 802.11n Wi-Fi technology
and Bluetooth 2.1.
“We’ve built the world’s thinnest notebook — without sacrificing a
full-size keyboard or a full-size 13-inch display,” said Steve Jobs, Apple’s
CEO. “When you first see MacBook Air, it’s hard to believe it’s a
high-performance notebook with a full-size keyboard and display. But it is.”