iPhone 5 Will Get Larger Screen But Will The Pixel... 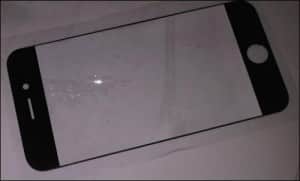 Apple is rumored to add a larger 4-inch or 4.3-inch screen to the iPhone 5 but space constraints and pixel density could hurt more than help.

China’s 1st iPhone 5 photo has surfaced! From this photo it seems that the screen size will be larger than iPhone 4. There has been a lot of specualtion about a larger screen and maybe this will be one of the upgrades we will see when iPhone 5 is released this summer.

The part is supposedly the iPhone’s digitizer panel with a larger bezel to accommodate an edge-to-edge display. Assuming this part is meant for the iPhone 5, it would mean a larger display but would cost developers or Apple.

New Android and Windows 7 smartphones coming from HTC, Motorola and Sony are moving toward 4-inch or larger screens with a standard resolution of 800 x 480. The iPhone, while having a smaller 3.5-inch screen, has a resolution of 960 x 640 which can be classified as a Retina Display. The problem with moving to a larger screen would be the iPhone losing it Retina Display status or increasing the resolution which would hurt developers forcing them to rewrite their Apps.

Apple has the choice of increasing the iPhone’s resolution forcing developers to rewrite their Apps as the resolution wouldn’t be pixel doubled and would cause a fragmentation of Apps. The easier choice would be for Apple to keep the same 960 x 640 resolution on the iPhone 5 and physically increase the display but lose Retina support as the phone would have a sub 300 DPI display.