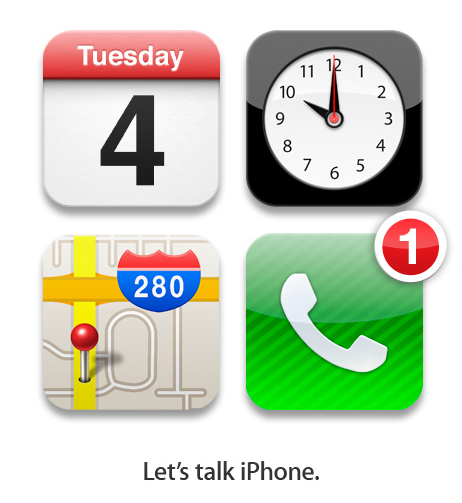 The invitations (seen above) have gone out, and Apple is ready to take the wraps off its next iPhone exactly one week from today: Tuesday, October 4th. And it’s taking place at Apple’s HQ in Cupertino, California, and new CEO Tim Cook is expected to take over Steve Jobs’ usual role. Pundits and fans have been waiting for this all summer long (if not longer), so the Internet is already ablaze with the news, along with loads of speculation.

Chief among the conjecture are the four icons in the invitation. Several news blogs are suggesting that the icons provide clues about both the event and what will be announced. The Calendar icon shows the date of the event, which seems to confirm this hypothesis. Following this logic, Apple’s event will begin at 10:am Pacific Time (according to the Clock icon), the Map icon has a flag marking One Infinite Loop, Apple HQ’s address. But here’s where it gets interesting. Since the Phone icon has a “1,” some are reading this as a subtle hint from Apple that all the conjecture about the possibility of two new iPhones being announced — the iPhone 5 and a mid-range device called the iPhone 4S — is flat out wrong. Might the “1” be telling us that just one iPhone is the subject of this media event? And if so, which one?

And of course there’s the ultimate question: How long after the keynote presentation will it be before the new iPhone becomes available? Apple usually prefers to make new products available “immediately” with their announcement events, but this isn’t always possible. What do you think? Will it be a few weeks or months after the event that the new iPhone goes on sale?