You are here: Home / iOS / iOS 8.3: Hello Diverse Emoji AND the Vulcan Salute. Still No Facepalm. 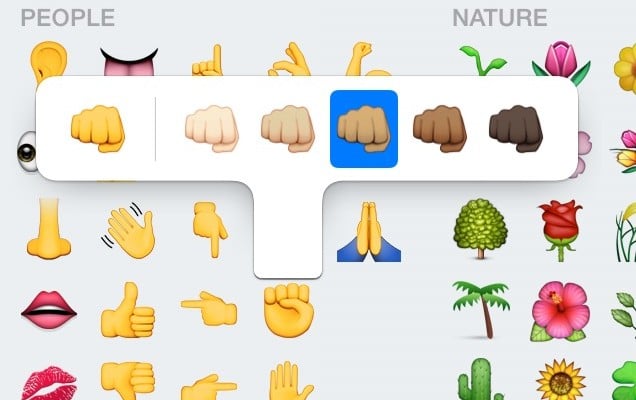 The long awaited (for some, at least) update to iOS 8 is here, and politically correct emoji fans will enjoy the diversity.

iOS 8.3 does come with practical features like filtering unknown senders and report them as junk – both for iMessage and text messages. There are also the usual bug fixes, of course.

What adds fun, though, are the new emojis.

If you look at the emoji keyboard, however, you might be initially disappointed as you’ll only see Simpson-esque yellow characters. Where the heck are the racially diverse emojis?

The answer is simple: tap the emoji you want to use and hold it for a second. You’ll then see emojis with different skin tones. Take note that when you choose a non-default colored emoji, that will become the default.

What I’m truly happy about is Spock’s iconic Vulcan salute is part of the update. Star Trek fans, rejoice!

However, you won’t find the Vulcan salute emoji in the stock keyboard – yet.

But don’t fret because there is a workaround. Here are the instructions from Mac Observer.

Then, “go to Settings > General > Keyboard > Shortcuts and tap the plus sign. In the “Phrase” field, paste the emoji. In Shortcut, type the abbreviation you wish to use to get this to appear. If you want to do this on your Mac instead, you can add it by going to System Preferences > Keyboard > Text and creating it there. (Bonus: If you use the same Apple ID on your Mac and your iPhone, doing this one place will make it show in the other. Magic!)”

I have a feeling that the Vulcan salute will make many an iPhone user’s day – including yours truly.

On another note: How the iPhone Helped a Cancer Survivor Live More Healthily