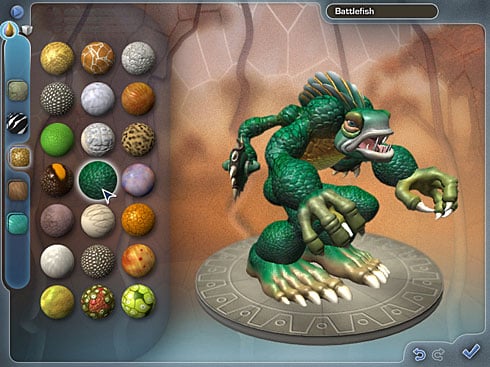 Spore is a game with a lot of hype behind it, and a very long development history. To some people, Spore may be their most anticipated game ever, and now we’re looking at it being released in 2008. I stopped by the EA booth today and got a chance to play Spore for a minute. The only thing they are showcasing here at Macworld 2008 is the creature creator – so I certainly didn’t get an “in-depth” look at the game, but I did get a few minutes to play what they had available.

The creature creator really allows you to make some of the wackiest and unique monsters that I’ve ever seen in a game. You can layer the color and texture of their skin, you can give them dozens and dozens of different eyes, mouths, arms, legs, hands, feet – you name it. There must be millions of combinations of things you can do with this creator – and it’s very simple.

It really makes me excited for the game, and I’m looking forward to seeing it. Thankfully, EA announced that it’s going to release Spore for the Mac at the same time as it’s PC counterpart sometime in 2008. I can’t wait to try it out.