Halloween at the Jobs House Shows Off His Fun Side 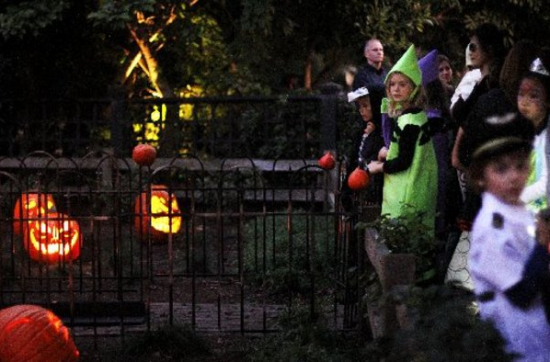 I’d never heard that the Jobs family opened its Palo Alto home to trick-or-treaters on Halloween night every year, but not only is it true, but his family has continued the tradition this year — even though public interest in the family was higher than ever.

Monday night in Palo Alto, California, around 50 local trick-or-treaters outside the house of Laurene Jobs and her family were greeted with huge jack-o-lanterns, dry ice fog, dummies in scary masks, and thunder emanating from speakers hidden somewhere on the front lawn. Even though Jobs died on October 5th, giving his family every reason to bow out of this neighborhood tradition this year, they chose to carry on. 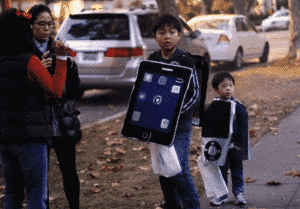 According to the Palo Alto Daily News, the home’s front gate opened at 6:30pm, allowing costumed children and their parents access to a table in the front yard, where three unidentified women “handed out fist-sized cellophane bags filled with orange candy slices, Toblerones, and sour drops.” Two brothers who came were even dressed as an iPad and an iPod (pictured at right).

Apparently, this Jobs family tradition stretches back several years. Why am I mentioning such a minor family anecdote here, at Apple Gazette? Well, I find it pretty fascinating, in light of all the press that Steve Jobs, the bestselling tell-all biography by Walter Isaacson, has been getting for its unflinching details about what a “grade-A jerk” Jobs could be (to put it nicely). There’s no doubt he could be a difficult, uncompromising man to work for and with. But was he the horrible human being that some now believe?

There’s also Jobs’ moving eulogy, written and delivered by his sister Mona Simpson at his funeral, that paints a very different picture of Jobs as a humble man, an overachieving romantic who cared deeply about the things in life that truly matter.

Since his passing, Steve Jobs has become one of the most fascinating people of our time. But which version of Jobs are we to believe is the real one? The tyrant described in the official biography and by a number of his co-workers (both past and present)? Or the gentle Renaissance man with a beautiful mind?

I suppose that’s ultimately up to each of us. I also suspect that there’s plenty of truth in both descriptions. Like every other human being who ever lived, he was a complex individual, a study in contrasts. And I doubt that the final word will be written on his place in history for a very long time to come.