Apple Updates iWork for iPad and It’s a Doozy 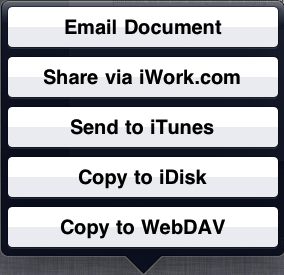 The big issue with Pages and Numbers on the iPad was finding a way to sync the documents with your workflow. Let’s say I was working on an article on my iPad, and I had to take a break. A few hours later, I was ready to work on it again, but now I had access to my computer. I’d have to export the doc on the iPad, and then either e-mail it to myself, send it to iWork.com, or just plug it in and download it via iTunes. None of those options were fantastic for me, but now, we’ve got a few new options.

First, there’s Copy to iDisk, which is great for those of us with MobileMe. I have it, but I never use the iDisk feature because I have Dropbox. Turns out though that there’s also a new Copy to WebDAV option. What’s that mean? Got me, but I hope it’s an in that Dropbox can use in the future. If not, I imagine once 4.2 is live that Dropbox will figure out a way to get it done.

Regardless, there’s also new options to export Numbers docs to Excel, and Keynote to PowerPoint. Neat, right? Well it’s neat to me. Don’t get all mad because you didn’t get that GIJoe Aircraft Carrier that you asked for in 1987, I had nothing to do with that.