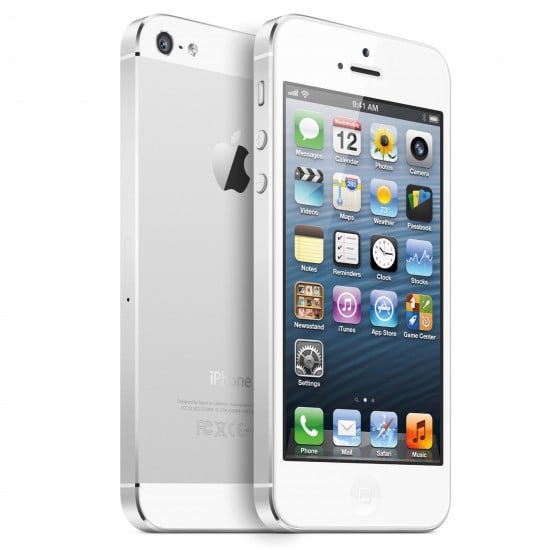 At long last, Apple has made the iPhone 5 real. But this was a huge, mega-event that also introduced a brand new iTunes, a “reinvented” iPod line, and much more. Let’s skip the hyper-technical overview and get to what you really need to know. 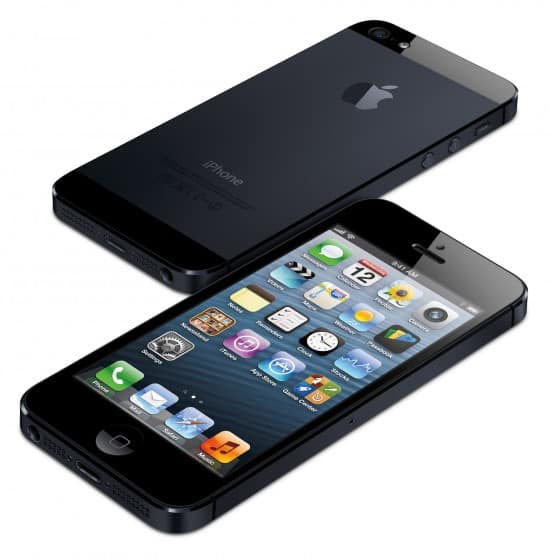 The rumors were true — pretty much all of them. The new iPhone, after rising dramatically from the stage floor, proved to be lighter, thinner, faster, and taller than the iPhone 4 (and 4S). That Apple managed once again to pack so much into so tiny a package is truly a testament to Jony Ive’s incredible industrial design team. It keeps the same Retina Display resolution as its predecessor, but expands it to a taller, four-inch size.

The new height essentially gives you an extra row of app icons on your home screen, while also allowing you to play movies at something much closer to the standard 16:9 aspect ratio that’s used for most feature films, when the phone is held sideways. No actual reason was given for upping the display’s size, but Apple explained that they kept it at the same width because they believe it’s the perfect width for holding (and using) in one hand. 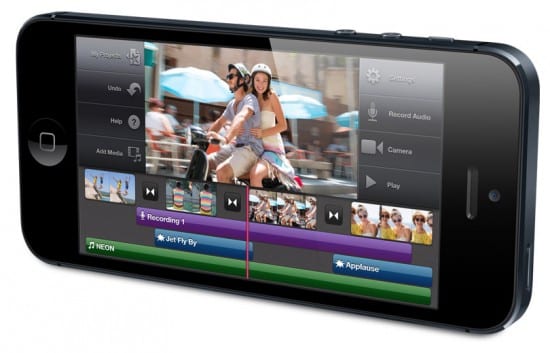 Of course, you can’t change the aspect ratio of the display without needing to update the apps that use it. Phil Schiller said that devs will be able to upgrade their apps for the new size “very quickly,” but we’ll see if that prediction holds true. Apple itself has, of course, already updated its own apps for the new ratio. Older apps that choose not to upgrade will be shown at their original resolution, with black letterboxing at the top and bottom of the screen.

Among the other new bells and whistles… The battery life lasts a bit longer than the iPhone 4S’ battery. The iPhone 5 uses a technology dubbed “Ultrafast Wireless” that basically means your wireless connections will run a lot faster than they used to. It’s got a brand new “A6” Apple-made processor, which makes everything run way faster — including video games. The same basic camera is in the iPhone 5 as what’s in the 4S, only they managed to cram it into a narrower space. There’s a new camera feature for taking panorama images that looks really nifty, because it compensates for unsteady hands while you spin in a circle to take that great big picture. One of the biggest new features is the smaller connector. It’s called “Lightning,” as a counterpoint to the Mac’s Thunderbolt connector. It’s smaller, faster, and works regardless of which way you plug it in. An adapter is available as a go-between for your current USB connector and Lightning.

iPhone 5 will be offered at the same price points that the 4S was: $199 for 16GB; $299 for 32GB; and $399 for 64GB. Pre-orders begin on Friday (Sept. 14th) for shipping to begin one week later, on Friday, the 21st. That’s unbelievably fast for a new product roll-out, so all those rumors we heard were true about Foxconn already hard at work manufacturing these things for months. The iPhone 4S is being lowered to $99, while the iPhone 4 is now free!

iOS 6, by the way, will be released on September 19th, for all compatible devices. (iPad 1, and iPhone 3GS and earlier models: you’re out of luck. Sorry.) 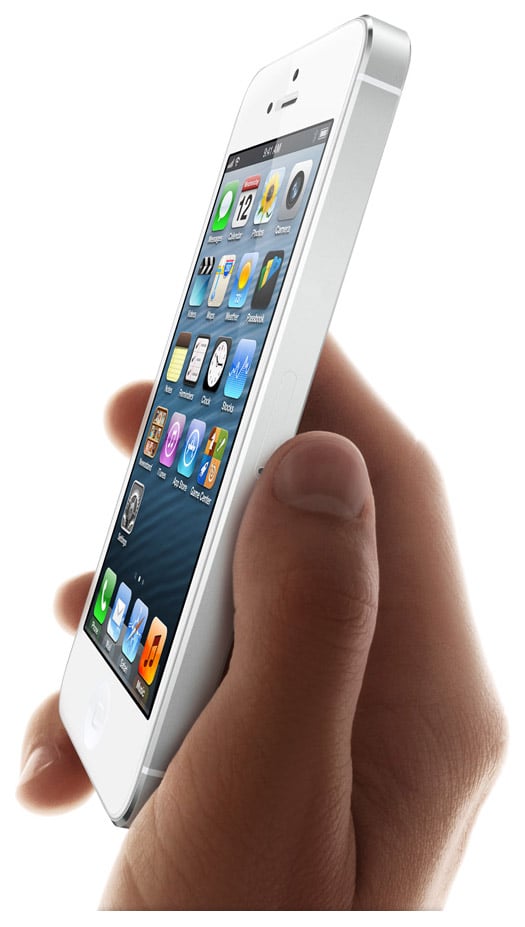 The iPhone 5 is one impressive machine. Its thinness contrasts sharply with just how much capability is packed into that tiny package. But the event left me scratching my head about the display’s increase in size. There was no big, important reason for changing the size of the screen, no justification for the zillions of app developers who now have to change the aspect ratio of their apps (which I think is a pretty big deal, despite what Schiller said). The taller screen is cool, no doubt about it. The iPad proves that with touchscreen devices, a bigger display really is better. I’m just a little surprised that Apple didn’t try harder to sell us on why we have to have it. That’s something they’ve always excelled at in the past.

Also, there seemed to be more leaks about the iPhone 5 than any previous model. The infamous Gizmodo debacle with the iPhone 4 notwithstanding, hardly a day has gone by over the last few months when yet another part of the new iPhone got sneaked out of Foxconn and plastered all over the Internet. Maybe it’s just a reality of the state of the media (and people’s insatiable craving for secret, insider info), but the lack of any real surprises about the iPhone made the unveiling feel a little ho-hum to me.

A brand new, fifth-generation iPod Touch was introduced that looks mighty sleek. Seriously: this thing is crazy thin. It’s thinner than it has any right to be. I think there’s dark magic involved. Just like the iPhone 5, it’s got a 4″ Retina Display and a Lightning connector cable. For the first time, the iPod Touch will come in 5 colors: Black, Silver, Red, Blue, and Green. Siri is coming to the iTouch, and there’s a tiny, round “Loop” on the back of the device that you can hook a wrist strap to. Apple said that the iPod Touch is the most popular gaming device in the world, which is pretty remarkable. This new one does nearly everything the iPhone 5 does, except make phone calls.. Pre-orders begin Friday for shipping sometime in October. The new iPod Touch is priced at $299 for 16GB and $399 for 32GB.

Apple also brought out a completely redesigned iPod Nano. This seventh generation of the Nano returns the device to its roots, steering away from the tiny, square touchscreen, and back to a tall, thin design. It’s got a 2.5″ multitouch Retina Display, a home button, and six on-screen buttons — buttons which are, curiously, circles. Unlike iOS icons, which are rounded squares. Bluetooth is built in for the first time, allowing for wireless streaming to things like car radios. It also supports the new Lightning connector. The 16GB iPod Nano ships in October for $149.

Finally, Apple introduced a successor to its earbud headphones. The new devices are called “EarPods,” and feature an entirely new design based on Apple’s research into the shape of the human ear. It’s made to “aim sound straight into your ear canal,” while being more comfortable to wear. EarPods come with iPhone 5, and the new iPod Touch and iPod Nano. They’ll also be available to order solo, but Apple didn’t say how much they’d cost.

I can’t get over how ridiculously thin the iTouch is. My brain is unable to grasp how it can do so much and have so much horsepower, in a casing that looks barely thicker than a credit card.

But Steve Jobs is clawing at the insides of his casket over those circular icons on the Nano. 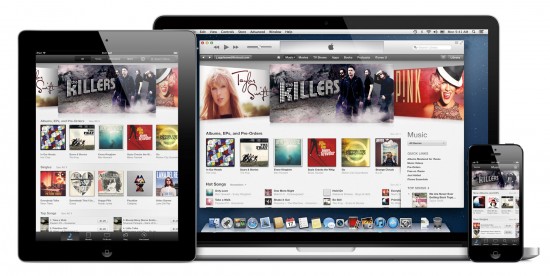 As expected, a new version of iTunes is coming to iOS devices and to desktops. It features an entirely new design that’s cleaner and simpler, and, Apple claims, improved speed and performance. Music albums in iTunes are shown in a grid, which slides open in the middle to show the track list when you select something to play. There’s also a completely new “tiny player” that’s both more discrete and more functional than the current one. The iTunes Store has been redesigned as well, with front pages showing a carousel view at the top similar to Cover Flow.

You’ll note in the screenshot above that the Ping tab at the top of the screen is gone. As expected, Ping is being retired.

The new iOS version of iTunes comes with iOS 6 on September 19th. The new desktop app will arrive in “late October.” As always, it will be a free download.

I still don’t understand why Apple doesn’t spin off the App Store from the Music/Movies/TV Store. Apps are entirely different beasts than media, and require a different layout for their store pages. Having all this stuff crammed into a common store feels too shoehorned. 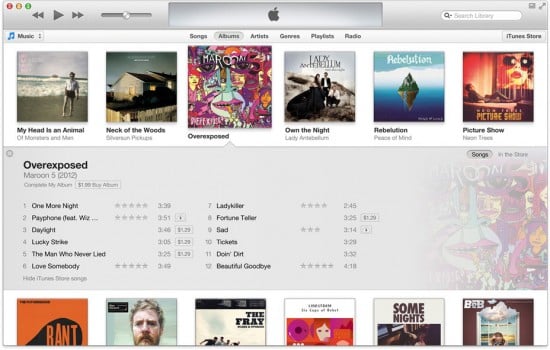 Okay, so let’s hear it. This was quite an event with several new Apple products unveiled instead of just one. What do you think of all this new stuff? Will you be buying an iPhone 5, or a new iPod?